Home Breaking The Supreme figure in 72 million the business of Nene Barral, the... 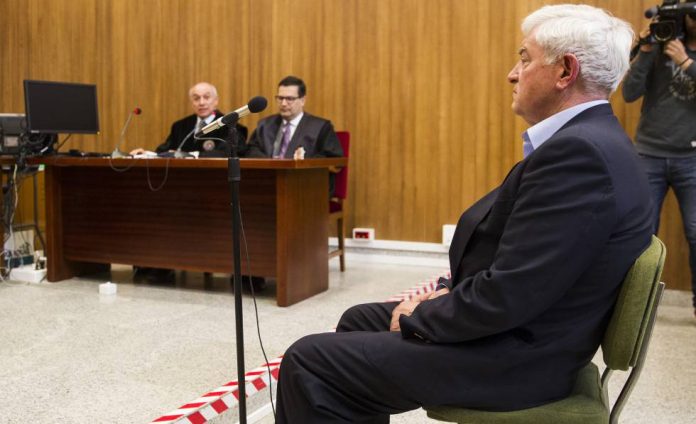 The Supreme Court has put value in a car emporium of contraband tobacco that supposedly led José Ramón Nene Barral, one of the pioneers of the illegal business in the Ría de Arousa, the former strong man of the PP in the area and for 18 years mayor of Ribadumia (Pontevedra). The proceedings, from the Court of Instruction 1 of Lugo, within the framework of the Operation Zebra, were under the secrecy of the legal process and continue to be. Had transcended several house searches in the environment of political galician, but didn’t know details of the investigation as their large international reach, or the value of the tobacco allegedly imported by the network. However, self-published by the Criminal Chamber of the Supreme magistrate Paul Llarena acts as a speaker, a figure at more than 72 million the price of the goods moved by the fabric of Nene.

Lara orders the registration of several houses of the family of Nene Barral, The former mayor of the PP accused by smuggling pays and dodge the prison Contraband in the office of the mayor

José Ramón Barral Martinez, 81 years old, with transcript on the series Fariña —based on the homonymous work of the journalist Nacho Carretero— in the figure of Nino Balbin, was the right-hand side of the considered patriarch of the tobacco smuggling in Galicia, the deceased Vicente Otero, Terito, to whom Manuel Fraga came to honoring as a militant copy of Popular Alliance (AP). Nene ruled almost two decades by majorities absolute in Ribadumia, a town close to Sanxenxo. He served as mayor for AP and PP for 18 years until he was arrested in 2001. Section for the popular, he founded another party with the one that followed with the reins of the Consistory. Over the years, with Fraga in the regional Government, was one of the strong men of the popular in Galicia despite of leading a town Hall small.

the order of The Supreme agrees, at the request of the prosecution, submit to the National Audience, the summary that I had opened in Lugo magistrate Pilar de Lara due to the geographical extension of the case, which affects to Spanish ports such as Barcelona and Valencia (in addition to the Portuguese Sines), and has connections in three continents. In his writing, the Supreme court used the fictitious name of Darius to refer to the leader of the network, which, according to the research sources consulted, is no other than the Rod.

Llarena highlights the “numerous investigations practiced” until the moment, in which they have intervened, both the Service of Customs Surveillance as the Udyco (Drugs Unit and Organized Crime of the national police) and the OLAF (European Office of Fight against the Fraud). These investigations have led to Pilar Lara to Miami, where he worked to fill out a rogatory commission in February of 2017, at the invitation of the office of the special Prosecutor in this city of Florida. According to the same sources linked to the case, “the information provided” at the time “by the Spanish authorities” was “crucial to the U.S. desarticulara the part american of the organization linked to Nene Barral”.

inquiries international carried out by various agencies so far, collects the self of the Supreme, “have revealed the existence of a criminal organization is perfectly structured dedicated to the smuggling of tobacco into Spain, by different routes, and money laundering”. “The modus operandi” of the people “directed by Dario”, describe below the judges, was the introduction of the tobacco “through containers” up to three ports. So, were intercepted several of these transports in the years 2011, 2012 and 2013.

According to the court decision, the Supreme court considers itself competent to the National Audience, because the fabric under suspicion has members in different parts of Spain and different countries,” and “the fraud committed has resulted in a serious way in the national economy, and harmed to a generality of people.” “We have before us the existence of clear evidence of the commission of the crimes of smuggling of tobacco, misrepresentation and money laundering, carried out by a criminal organisation”, argued the judges. To do this, they continue, “Darius, a resident of Galicia” had “with the collaboration of members of the same, both from different points of Spain (Navarra, Extremadura, Catalonia, and Valencia) as well as from overseas.”

“apparently, you are using networks and infrastructures” of “various countries of the European Union (such as Portugal and Greece) and non-eu nationals (such as the united States, the united Arab Emirates and China),” continues the self. According to the investigation, the containers were transported by sea to the ports of Barcelona, Valencia, and Sines (Portugal), sometimes directly from their place of origin and other, via pathways in-between.

Some transport operations “have taken place directly from Usa (Miami)”, details the Supreme. It is the case of the mark 305’S, manufactured in the south american country for the company Dosal Tobacco. Other times, the containers traveling “via Greece” or “pathways to asian as the united Arab Emirates (Dubai) and China (Hong Kong)”. The packs coming from China, warns the car, were tobacco Marlboro “had been forged”. All of this smuggled goods could enter in Spain “by forging multiple documents”. The activity carried out, concluded the judges, “is of great complexity and is related to the organized crime” at the international level.

The first investigation for the alleged crimes of smuggling, bribery and revealing official secrets that precipitated the fall of the Rod was initiated in 1999 and forced him to resign in 2001, after his arrest. The court thus linked with a few containers of tobacco illegal intervened in the port of Vigo for sale in the Uk. The statement, revived in the court of Vilagarcía at the time that Lugo already investigating the case Zebra (referred to the Supreme in its self), has not yet come to trial but the Prosecution has already requested in 2017 for these facts 10 years and a half in prison. However, it was already punished in 2016 for two tax crimes committed between 2006 and 2007, and related business of wind power and aquaculture developed in China and Chile. For these crimes the Prosecutor asked for eight years in total, but, thanks to an agreement between the parties, Barral was only sentenced to two sentences of six months.