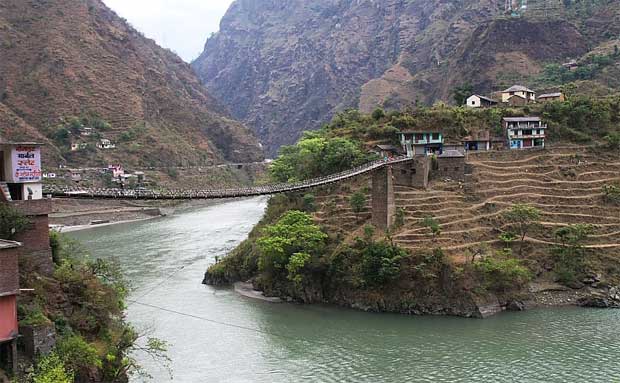 One of the most popular and scenic driving routes in Himachal Pradesh, a road trip from Shimla to Manali was long due on my travel wish-list. So, when I finally had a chance this summer, to spend a weekend in Manali, I chose to blaze the famous Himalayan trail. A few friends and I availed a convenient Shimla sightseeing taxi which included the ride from Shimla to Manali and a local tour of Manali.

The distance from Shimla to Manali is about 250 KM and takes about seven hours of travel time. However, since we were traveling during the peak season, there was quite a bit of traffic on the route we took, via NH 205 and NH 3. Also, since it was the first time we were driving through this route, we wanted to stop at some iconic places and make our trip wholesome.

We started early in the morning, so we could use the daylight hours and reach Manali before night, and still manage to stop over at few places on the way.

From one Himalayan beauty to another, the road from Shimla to Manali is exquisite, to simply describe. The serpentine highway lined with pine forests, hilly hamlets, and majestic views of the mountains made for the perfect image in every frame.

Places on the way

At about 33 KM from the town, we reached Shalaghat, where we stopped for breakfast and tea. Thereafter, we crossed small towns like Daldamode, Bage, and Beri junction, just before we touched the first landmark pit stop at Bilaspur. This is a major trading and travel junction between south and north Himachal, bustling with travelers and locals alike. The highlight of Bilaspur, as I had always heard of, was the Gobind Sagar Lake. It was a little detour from the town center. We took the exit from the highway and drove through a narrow, unnamed road for about an hour and reached the southeast edge of the lake. The warm season had ushered in fresh foliage and crispness in the air. It was indeed a serene enclave surrounded by abundant greenery. I could also notice a few exotic birds, which thrive and nest in the mountains during this season. The lake is a result of the Bhakra-Nangal dam, which can be better seen from the NH 503, on the other side of the lake.

Soon, we were back on the road and continued on our journey. After nearly 60 KM, we reached Sundernagar, where we stopped for lunch. The highway side was lined with dhabas, where travelers thronged for a meal break, on their way to Manali or further ahead. Sundernagar is also known for its sparkling lake, which we could see from the highway.

It was almost afternoon when we reached Mandi. Here onward, the landscape started to change gradually and became more scenic. The clusters of towns gave way to small villages with a handful of cottages, each apart from the other by miles, and the surroundings became quieter. Mandi is also the place from where the Beas River becomes prominent and starts running parallel to the highway, offering a sight to savor. I wondered, if there was no map or routes defined, one could just follow the river and easily reach Manali. We decided to make a quick stop at the Pandoh Dam, on the way, about 12 KM from Mandi town. We had to climb a small hill to get a complete view of the dam.

Back on the highway, we were soon passing through a long, tunneled road, before we made our next stop at the quaint village of Aut. We stopped here for tea at a small eatery on the banks of the Beas River.

It was another 30 KM of drive, before we reached Kullu. The evening market had just started, and the streets were buzzing with local merchants vending their fares and tourists snaking through the shops.

We didn’t stop at Kullu since we had plans to come back later during our stay in Manali. As we continued to drive further down the cedar-lined roads, the sunset colors started to show across the clear summer sky. The reddish hues of the sun against the green mountains was a magnificent play of colors. The landscape was a good preview of what we could expect ahead, or perhaps, even better

For our last break for the day, we stopped by the famous Naggar Castle. This is a must-visit site on the Shimla-Manali route. The 15th-century castle was the official seat of the Maharaja of Kullu, about 500 years ago. Built of stones and solid timber, the robust structure also displayed fine architecture, dating back to that era. Although it is now maintained as a heritage hotel, it is worth visiting just to admire the original piece of work.

Once we reached Manali, it felt like we were back to civilization, with the Mall Road alive and vibrant with shops, restaurants, and entertainment options inviting the endless crowd. Since we had availed a cheap and reliable Shimla to Manali tour package, it was much easier to plan the next few days, touring the town and exploring the neighboring locales.