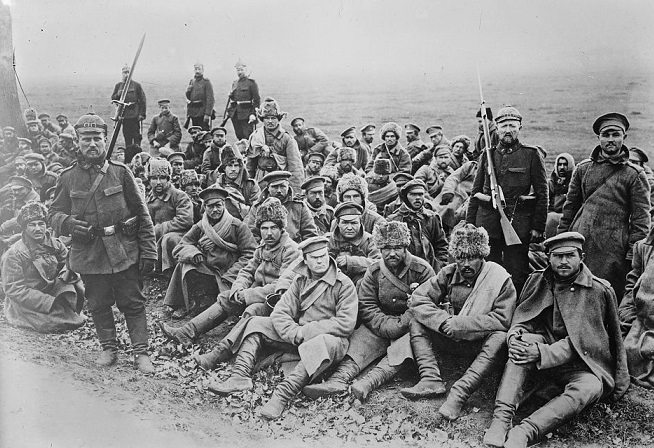 the First world war was unprecedented for most European countries in the amount mobilized in the army and in the number of losses, including losses of prisoners of war. This year, the centenary of the end of the war, but still the exact figure of losses of the Russian army, including a number of Russian officers and soldiers trapped in enemy captivity, is unknown and a matter of controversy among historians.

the First attempts to count the number of Russian prisoners of war Dating back to the time of the war. In December 1916 the prisoners of war Department under the Ministry of foreign Affairs of the Russian Empire counted that in enemy captivity is 2.5 million Russian soldiers and officers. In the period of the Provisional government, on the request of the head of the French military mission of General Janin on losses of the Russian army, the Russian Supreme Commander 23 (10) October, 1917, said that Russia has lost 2 million prisoners 43 548 thousand troops.

the Estimate was intensive in the first years of Soviet power, and this figure is growing. So, in the directory “Russia in the world war 1914-1918”, published by the Central statistical office of the RSFSR in 1919, the number of Russian prisoners of war as of September 1, 1917, estimated at 3 million 343,9 thousand. In the same year of reference and statistical Department of the Soviet Central Board of prisoners and refugees has published data showing that in captivity was 3 million 911,1 thousands of Russian soldiers.

But this figure was not the maximum. On October 1, 1920, the above Department recorded 4 million 260,8 of thousands of Russian prisoners of war. However, upon closer examination, it was found that information about the same prisoner were duplicated in different files. In the case of revision, the number was reduced to 3 million 750 thousand real person.

However, the data of the Soviet authorities turned out to be exaggerated about twice compared with the opponents of Russia in the First world war. So, the Austro-Hungarian Bureau for accounting of prisoners of war estimated the total number of Russian prisoners in the camps of the “axis” February 1, 1917, 2 million 080 thousand 694 people. Of these, 1.4 million were in German camps. With this figure the same and the estimates of the German statisticians. During 1917, which was not conducted major military operations, this number could significantly increase.

white emigre Russian historian General, N. N. Golovin, comparing data and accounting systems of the Russian, German, and Austrian archives, came to the conclusion that during the First world war in enemy captivity were 2 million 417 thousand (round number of 2.4 million) servicemen of the Russian army. Although in some modern editions are figures 2.8, 3.4 and 3.5 million, but most historians accept count Golovin. This number is also indicated in the Wikipedia.

What happened to Russian prisoners of war

Somewhat more complicated is the question of how was the fate of the masses of Russian prisoners of war. Moreover, in the Royal army recruited soldiers from various regions of the Empire, many of which in 1918 became independent States. Even harder to calculate how many people died of being in captivity. Some authors put the number at half a million died in captivity, in no way is it justifying. At the same time Golovin, based only on German data, has only 27.7 thousand died in captivity, which seems clearly too low. Moreover, the data Golovina refer to the end of 1917, but the majority of Russian prisoners of war still remained in the countries of “axis” after that date. Most often historians use the now number 190 thousand died in captivity of Russian soldiers.

Most often taken by historians account of repatriated prisoners looks. Until the conclusion of the peace of Brest in March 1918 returned from captivity 775 thousand soldiers of the Russian army, with only 60 thousand of them fled. The rest were sick, returned by the Germans and Austrians on the exchange of prisoners of war (International red cross), and drafted into the Royal army by the inhabitants of German-occupied Poland and the Baltic States (Finns served in the Russian army only voluntarily).

In a number of publications there are allegations that the mass repatriation of Russian prisoners of war was completed in 1922, after the conclusion of the Soviet-German Rapallo Treaty. They are based on nothing. On the contrary, by 1922, the repatriation of Russian prisoners of war were already completed. First, during the period of the Brest-Litovsk Treaty, March to November, 1918, returned to their homeland 181.4 m thousand prisoners of war. In the first place, exempt sick and crippled. Imperial Germany did not hurry with the release of other, as yet waged war on the Western front and was in need of labor. Among the released were the inhabitants of Soviet Russia and the Ukraine and the Caucasus under the control of Pro-German governments.

the collapse of the Austro-Hungarian monarchy and the November 1918 revolution in Germany had released all prisoners of war. During the winter of 1918/19, was back 949,5 thousand former prisoners of war. Most of them, be they Russians, Ukrainians or representatives of other Nations, soon found himself in the crucible of the civil war. In February 1919 the Western powers have established control over the remaining prisoners of war camps in Germany and forbade their leaving. This was due to the fact that the Entente did not want to so the Red army was resupplied. At the same time in a pow camp were allowed recruiters the white guard armies. Who agreed to join them, they received high content and were released from the camps.

From April 1920 when the UK officially changed his attitude to the White movement and no longer support him, resumed the vacation of the former Russian prisoners of war to the territory under BolshevikAMI. By the beginning of 1921 left home a total of 27 thousand prisoners, but they were released within a year.

All according to historians, in 1918-1921 in Russia, Ukraine. Belarus and the Caucasian countries, who in the end, too, Soviet republics, and returned 1 million 142 thousand former prisoners of war. However, some of them (the exact figure is unlikely to be ever known) immigrated to the white and along with them, if left alive, was forced in 1920 to again leave his homeland, now forever. Another 215 thousand were repatriated to the Baltic States. 95 thousand prisoners of war the Russian army of various nationalities all crook remained in Central Europe.