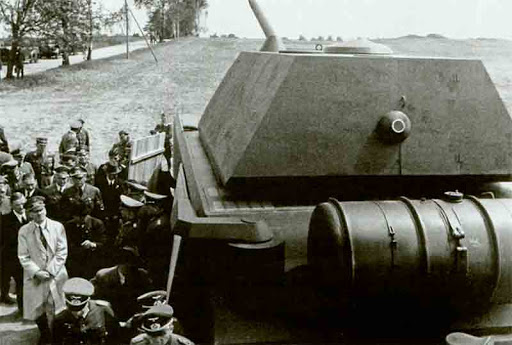 During the Second world war was created by Katusha, BAZUKA, T-34, which played a decisive role in the fighting. But most of the projects have remained on paper or as prototypes.

In Japan, because of geography, during the Second world war, special attention was paid to the development of the Navy and aviation. Among the ships commissioned was the giant battleships “Yamato” and “Musashi”. Third, the unfinished battleship during the war it was decided to alter the carrier. Since all the ship design change was impossible, “Shinano” kept part, uncharacteristic of the carrier reservation. But when the displacement of nearly 72 thousand tons, the ship could carry a maximum of 47 aircraft, while aircraft carriers special construction of the transporting aviation unit in two more. “Shinano” haven’t had a chance to prove himself as a fighting unit. 29 November 1944 unfinished aircraft carrier was attacked by an American submarine and sank after being hit by four torpedoes.

In the event of a large-scale landing operation in England, the German command planned to use gliders. Ju-322 was designed for the landing and shipping of military equipment. The wingspan of this largest of the world’s glider reached 62 meters. By 1941, in various stages of Assembly were 98 gliders, and one was ready to test. The first flight showed that the glider is very “capricious” and can create a number of dangerous situations during takeoff. Work on the project was delayed.

Meanwhile, heavy losses of German paratroopers during the operation of the landing on Crete showed the weakness of the gliders in. In addition, the reorientation of the German war machine on the war with the Soviet Union demanded to postpone the invasion of Britain. Further work on the creation gigantskogo glider was acknowledged unreasonable.

In the fighting of the initial period of the great Patriotic war fared well tanks KV-1, which served as the basis for creating a series of prototypes with different armament. Combat experience of tank crews of the red Army in the first phase of the war showed the need to equip troops with machine with higher output of fire than standard tanks. KV-7 was carrying one 76 mm and two 45 mm guns, installed in a stationary cabin. However, in the absence of the new sample particular advantages over the serial KV-1, SPG KV-7 was not adopted and is not mass produced. In addition, KV-7 was the last in the Soviet Union a model of armored dual gun weapons medium caliber in the tower or the bridge.

At the end of 1942, Germany began work on the creation of super-heavy breakthrough tank “Maus”. The tank had to have a powerful armor and strong weapons. It was built two prototypes, which were extremely expensive and difficult to manufacture. Besides this, a tremendous mass eliminates the possibility of the movement of the “mouse” on the bridge. In General, the machine was powerful, but of little use in the Second world war, where the main role was played by the speed of production and delivery of weapons. 180-ton monster never got a chance to take part in the fighting. In April 1945 when the red Army approached, the Germans destroyed the prototypes due to the inability of their evacuation.

the English heavy tank A-38

In England also tried to build heavy tanks. One of them was A-38 valiant. It was created as a replacement for the tank “Churchill”. He was regarded as a weapon for the Middle East. Speed “Valiant” sacrificed to the powerful booking. The first prototype was manufactured by Ruston & Hornsby in mid-1944, when the fighting is localized in Europe and in the Pacific region, and the need in Eastern specialization of the tankPala. It became obsolete already at the stage of production. The result is A-38 remained in the form of two prototypes.

it is Remarkable, but during the Second world war tested the prototype of the famous carbine system Simonov SKS-45. Combat experience showed that the rifle cartridge was too powerful for use in battle at a distance of several hundred meters — it is good for the gun, but a regular arrow is not needed. The other extreme was thin, but lightweight pistol cartridge used in submachine guns. The “Golden mean” was the 7.62 mm intermediate cartridge in 1943.

In his example, in the future, there have been some examples of firearms, including a carbine system Simonov. The first experimental batch of SKS appeared at the front in the summer of 1944 during operation Bagration in Belarus. There weapons have received positive feedback from the troops, but the completion of the rifle was delayed for five years. Adopted it was adopted only in 1949.

during the great Patriotic war has become widely popular Soviet anti-tank rifle Simonov Degtyarev and. But it was created by others who used limited and existed only as prototypes. The most successful of them were anti-tank gun Rukavishnikova (under 12.7 mm cartridge). Field reports said that it passed with dignity the test, proved to be a convenient and reliable weapon, and recommended for serial production.

But he had serious shortcomings, in particular small penetration. The enemy, on the contrary, are constantly strengthened the armor of their machines. In the end, from mass production guns Rukavishnikova refused. However, such has been the fate of most anti-tank rifles, which played an important role in the first stage of the war, but in the fight with a weighted technique was ineffective and was used mainly to defeat transporters and emplacements PRtunica.