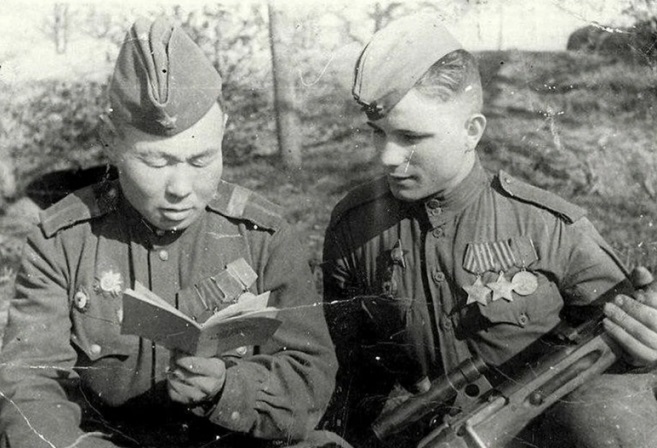 there is a widespread opinion that all the peoples of the USSR equally forged the victory over fascism, and you cannot highlight or diminish some of them. However, in no way questioning this principle, we note that it should not limit the study of state policy towards nationalities of the USSR. It was the Soviet state divided the peoples into more and less loyal to him, and more and less prepared for action in modern warfare due to historical stadial differences in their cultural development and level of civilization.

Out of fear of disloyalty to the USSR during the great Patriotic war are not recruited into the army the citizens of the Union of nationalities, which had their own States in addition to the USSR (first of all – who fought with the Soviet state or potential enemies): the Germans, the Japanese, Romanians, Hungarians, Finns, Bulgarians, Turks and Greeks, Koreans, Chinese. Have formed the rear part, involved in various, mainly construction works for military purposes.

of Course, every rule there are exceptions, not without them here. The representatives of these nationalities are found among fought and died in the great Patriotic war, among the awarded with orders and medals of the USSR. As a rule, volunteers were taken into the army for reasons of confidence in their political loyalty (and membership in the party, the Komsomol, etc.).

Curiously, the list of Slovaks, Croats and Italians, whose States were at war with the Soviet Union, as well as the Spaniards. The fact that the first two nationalities considered the Soviet Union as such with the state occupied by the Nazis. In the Soviet Union in 1942 was formed the Czechoslovak military unit (first brigade at the end of the war – building). The Croats are not separated from other Yugoslavs. Italians and Spaniards become a citizen of the USSR, could only be convinced anti-fascists. Especially many were in the Soviet Union of the Spaniards who emigrated after the defeat of the Republic in the civil war of 1936-1939, They were subject to appeal on General grounds; moreover, among them was a very strong influx of volunteers.

In the course of the war for the same reasons of political unreliability, but also because of appearing insufficiently high level of combat readiness of the mass of recruits in General, has been delayed a call of representatives of several nationalities. Since October 13, 1943 the State Defense Committee (GKO) ordered the release from beginning November 15, 1943, the appeal of youth born in 1926 representatives of indigenous nationalities of all the Union republics of Transcaucasia and Central Asia, Kazakhstan, as well as all the Autonomous republics and Autonomous regions of the North Caucasus. The next day t-bills decided to start their call with November, 1944, and in reserve and not in the army.

these rulings are Often misinterpreted as termination of the data call to all nationalities. However, they clearly stated that the postponement of military service for only youth specified year of birth. For all older ages it does not spread.

In rather ambiguous terms was the call among the indigenous peoples of the far North, Siberia and the Far East. Before the adoption of the USSR law on universal military duty from September 3, 1939, their representatives are not recruited into the armed forces. In the fall of 1939, was their first call. Some sources can meet the claim that from the first days of the great Patriotic war representatives of the indigenous peoples of the North began to call to the front. This contradicts the instructions on the GKO issued in the first weeks after the outbreak of war, about the liberation of the indigenous peoples of these regions of the RSFSR from the call. However, the exact indication of the date and number of this postidentification no. Search it by name gave no results. However, not all the names of the GKO during 1941 published.

the same authors reported that in some cases, to call indigenous peoples of the North came formally and there have been numerous cases of desertion of conscripts. In addition, in the Nenets national district of the Arkhangelsk region in January 1942, was formed to deer-transport battalion. There are indications of a similar formation in other regions of the North. Know the names of many indigenous peoples of the North, fought in the red Army during the Great Patriotic war and were awarded orders and medals of the USSR. Among them infantry, snipers, pilots etc.

From all this, it is legitimate to conclude that the General compulsory conscription into the army among the indigenous peoples of the North, Siberia and Far East Saami, Nenets, Khanty, Mansi, Evenks, Selkups, Dolgans, evens, Chukchi, Koryaks, Yukaghirs, Nanai, Oroch, etc. – was not made (although not excluded initiative of this kind on the part of some local chiefs). However, in some national districts of the aboriginal population on the basis of compulsory recruitment was formed auxiliary rear part, like the already mentioned deer-transport battalion, used in the specific conditions of the theater of hostilities on the Karelian and Volkhov fronts. The lack of compulsory conscription was due, in addition to the insufficient level of education for modern warfare, the nomadic lifestyle of these peoples, the difficulties of their military records.

encouraged while volunteerism among representatives of indigenous nationalities of the North. Volunteers auditioned in the military before being sent to the front. Preference was given to those who meet the following criteria: language proficiency and the presence of at least primary education, good health. Priority was given also party and Komsomol activists from the Tuthe earth’s peoples. Highly prized sniper quality professional taiga hunters. All this has created quite a huge influx of this category of Soviet citizens in the army, and especially in the different auxiliary parts, despite the fact that mandatory to send to the front of its representatives was not subject.