Home Breaking Who in the red Army armed with axes 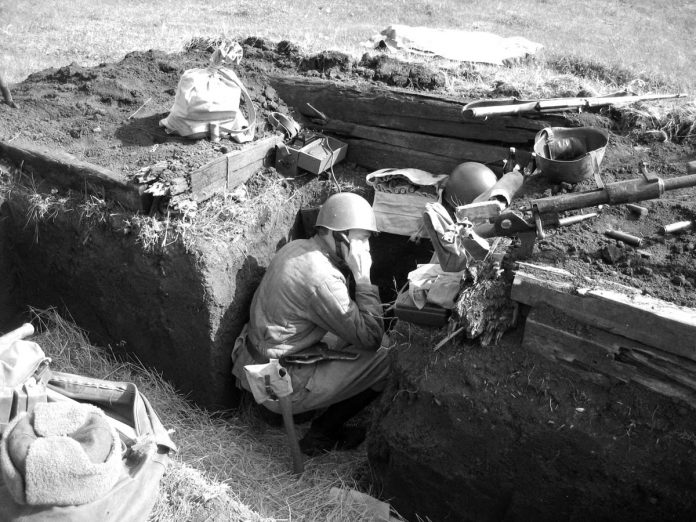 an Axe in skilled hands is a thing practically universal. It is indispensable both in the civilian Affairs (to build a house, chop wood), and in battle. Not by accident battle axe from time immemorial was considered one of the most effective weapons. The earliest battle-axes, found on the territory of our country, belong to the X century. But in service in the Russian and Soviet armies axes preserved up to our days. What is the role of the army axe in the era of firearms?

Axes in the Imperial army

under Peter I in the Russian army came first the engineering part. XVIII century is the era of “mine” or “tunnel” wars, when the army competed with each other in the speed of laying of underground tunnels and loading the ingenious explosive devices. At the same time the generals opened many opportunities that arise with rapid troop movements and energetic maneuvering. Tunnels required mounting structures, marches, without building bridges and pontoons. So there MINERGIE company and pontederia team. Later in the Imperial army, a new engineering units. Engineer company was engaged in building fortifications, roads, organization of camps and bivouacs, pontoon battalions – build bridges and pontoons, Telegraph part of the organization of Telegraph and telephone, the fortress and the mine company of the device of mine and other artificial barriers.

Needless to say that all of the work is unthinkable without the axes, which were armed with all the engineering troops are from the time of Peter the Great until the beginning of XX century.

However, used axes not only engineers and sappers. In 1906 the cavalry and Cossack units required element of the weapons were “small cavalry axe.”

the First world became the first in Europe “positioningNoah war” (the first time the characteristic features of trench warfare emerged in the United States, during the confrontation between the North and the South). For trench warfare is characterized by such specific features as the abundance of the trenches and underground, semi-underground fortifications, barbed wire, etc. And, of course, methods of warfare demanded the creation of certain types of combat units and assault units. The Russian army was no exception. In the fall of 1915 under the orders of General Plehve of cavalry in the 5th army in each company have created special teams of bomb-throwers, whose task was to get as close as possible to enemy positions and break them, opening the way to the main parts. In the armament of the bombers was, in addition to grenades, shovel, wire cutters for cutting barbed wire, and, of course, the ax.

Axe of the red army

the soldiers of the worker-peasant red army (RKKA) also actively used the axe. He was in service in particular, and infantry units. Every foot soldier had, in addition to personal combat weapons and entrenching tool (i.e. the tool with which the soldier is digging in and performs other actions on the “equipment” areas – harvesting of stakes, brushwood masking device of loopholes, niches, etc.). To the entrenching tool is treated sapper shovel and axe.

hero of the Soviet Union, Lieutenant-General of engineering troops, doctor of military Sciences D. M. Karbyshev taught at the Military Academy of the General staff. He was the author of the favorite sayings of students of the Academy: “One minesweeper, one axe, one day – one stump.”

However, the axe in the right hands was not only peaceful entrenching tool, it could become a formidable fighting weapon. Widely known feat of the soldier, Dmitry Ovcharenko, who managed to disarm a group of Germans, which included 2 officers and 21 private. When this brave soldier first acted the axe off the head of the officer and killed several fighters, and then grenades.

And, of course, the indispensable weapon was the axe and the guerrilla groups. In the period of the Finnish war, published by “Voenizdat” (Moscow, 1940) published a book, translated from the Finnish language, which was called “Guerrilla textbook.” In it, among other things, it described in detail the weapons, which should have every partisan and stated that every fighter must be the axe and Finnish knife, necessary for the bed outside the settlements. Real combat experience showed that the partisan axe necessary not only in order to chop firewood or twigs. Often the situation is not allowed to use firearms, and so as not to attract the attention of the enemy, the guerrillas resorted to cold. The axe in this case was simply irreplaceable.