Home Breaking Zaxid (Ukraine): the transformation of the “Kremlin tandem” 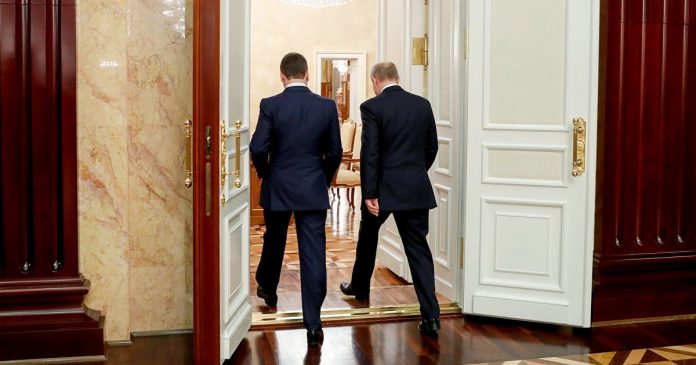 Russia is able to surprise. Not often and these surprises shock the world more. Like Boris Yeltsin on the eve of 2000 with his “I’m tired, I quit!”. Admittedly, something similar we have long expected from Vladimir Putin. But recently his Kazakh counterpart Nursultan Nazarbayev after a nearly 30-year tenure in power (and unlimited) decided to go supposedly on vacation (why “supposedly” — more on this later).

No, Putin has not said that he was tired, and even more so that goes away. Away went his faithful “Locum Tenens” Dmitry Medvedev. Headlines of this news are now full of the front pages of the world press, and there are reports of Putin’s constitutional reform. The Russian President announced it in his annual address to the Federal Assembly. Chief of Kremlin said that the current Russian Basic law was adopted in the crisis period of 1993, and now, they say, the situation has changed.

the New Constitution from Putin

in fact, Putin announced not merely change but a new Constitution of the Russian Federation, and suggested the adoption of innovations by popular referendum (as in the test, in fact we are talking about voting — approx. ed.). If everything happens as expected, then our North-Eastern neighbor of the President of the Republic will turn into a parliamentary-presidential. The state Duma deputies will be given the right not just to agree, but to suggest the Prime Minister and all government members. “The President should remain the direct leadership of the armed forces and the entire law enforcement system,” — said Putin. In addition, the Council of the Federation will be entitled to consult with the President regarding the appointment of heads of law enforcement agencies and prosecutors of the regions and the right to propose the head of state to remove from posts of judges of higher courts.

Why do we need the chief of the Kremlin? If someone thinks that the way he seeks to rehabilitate itself before the civilized world, introduce ourselves as a liberal democratic politician, he is seriously mistaken. In this context, very clearly commented on innovations of the Russian Minister of foreign Affairs of Lithuania Linas Antanas Linkevičius: “All these changes create an illusion, but someone they are still hopeful that something will change (…), but I think that really I can not change anything: if it’s not the pyramid of power, then it can be called another geometric figure, but it will remain the same. While the preconditions for the changes. It is important that Russia has changed in the approach to its foreign policy and changed its attitude to other countries, to neighbors, to the vision of the values that she declares, such as democracy, rule of law, no interference in the internal Affairs of other countries. In practice it’s not.”

moreover, if all the constitutional innovations Putin will in the end accepted, then Russia will further distance themselves from the civilized world. After all, Putin also made a proposal on constitutional limitations in the country of the requirements of international law, international treaties and decisions of international bodies. As he explained: “to ensure the priority of the Russian Constitution in our legal space.” For example, for Ukraine it will mean that any international instruments which require it to return the annexed Crimea, for Russia will have no values because they conflict with the Basic law.

so, Putin’s statement was intended mostly for internal consumptiontion. According to the most experts, he is preparing to solution to the “problem 2024”. In 2024, we will complete the second (actually fourth) presidential term of Putin. Of course, it would be possible to try again to use the “Locum Tenens” — Medvedev or someone else, who would then not prevent the return to the highest state position. But the repetition of the old trick, this time the Russians are unlikely to be accepted with the same tolerance.

We have seen growing avalanche of protest moods of Russians, especially among the local youth. Street anti-government protests are becoming more radical. At the same time, according to recent polls, confidence in Putin falls, the liking for him reduced. Last year, Putin’s rating has fallen to its lowest level over the last eighteen years. Although it is recognized that other Russian politicians and do not have this. So while all is not lost completely, the Russian leader had to act quickly and radically. 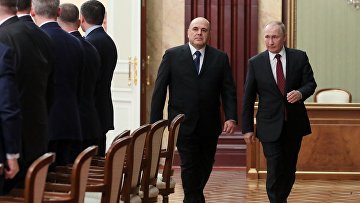 Anti-War: Putin wants to remain in history, not in властиAntiwar.com23.01.2020 Economic: Putin is looking for mechanisms that change of leadership will not be fatal to Russiasport.bg23.01.2020 WSJ: Putin appoints new cabinette Wall Street Journal22.01.2020

Now back to the resignation Medvedev. Pretty strange, with a strange explanation for the ex-Premier. To quote his words: “These changes, when they are adopted, in all likelihood, this will be done in the discussion as it was said, they will make a significant not only changes in a number of articles of the Constitution, but in General, the balance of power, Executive power, legislative power, judicial power. In this context, it is obvious that we, as the government of the Russian Federation, shall provide the President of our country the opportunity to take all the necessary decisions, and in these conditions, I think it would be right to, pursuant to article 117 of the Constitution of the Russian Federation, the government of the Russian Federation in its present composition has resigned”.

Although in fact, neither in the constitutional innovations of Putin, nor in a subsequent address to the Federal Assembly there has been no hint of the need for the Prime Minister’s resignation or the whole government. However, there is substantial disapproval Medvedev, insignificant results of the work of his office, which led to stagnation on the brink of crisis.

But during the eleven years of the existence of the legendary Russian power tandem such trouble happens with Medvedev for the first time? Far from it, but so far Putin treated the mistakes of his Junior partner rather condescending. So why now Medvedev has to go, why ruin a tandem? This question can be answered with another question: “And whether the tandem destroyed, perhaps he has simply taken other forms?”.

let’s See what position goes Medvedev: this is a post of the Deputy Chairman of the security Council. Because, according to the Russian law “On security”, the President presides in this structure, Medvedev became Deputy of Putin himself. Some political observers have already in this context to call the ex-Prime Minister “informal Vice-President.” Although, according to this law, there is a certain legal collision, because in the staffing list of positions in the security Council the Deputy Chairman is not provided, only the Chairman, Secretary, permanent members and ordinary members. On the other hand, according to article 13 of the same document, the President approves the regulation on the security Council. Therefore, theoretically Putin can easily submit for approval the position of his Deputy. And thus the old tandem live a new life.

In this context you should pay attention to the identity of the Secretary of the Russian security Council, and it is none other than Nikolai Patrushev. The veteran of the KGB and other Soviet-Russian intelligence services, who was involved in almost all the resonant operation of the Russian intervention abroad. And it’s not just the murder of former Russian agent Alexander Litvinenko in the UK or smuggling cocaine from Argentina. This includes preparation of the invasion of Georgia and Ukraine, provoking riots in Moldova, the operation of influence in all former Soviet States and the like.

Therefore it is not necessary to refute, “that “tandem” modernizarea in “tandem””. And since the Council oversees matters of security, foreign policy, military and military-technical cooperation, he actually has in its subordination of all power structures of the Russian Federation. That is, its influence in modern Russia, with its exaggerated power unit is difficult to overestimate.

Now, as promised in the beginning, back to the voluntary resignation from the presidential post of the leader of Kazakhstan Nursultan Nazarbayev. In this context, it is worth noting that even after retirement he never ceased to be a leader. Nazarbayev for life in fact recorded himself head of the Council of national security of Kazakhstan, which had previously been granted additional powers by constitutional amendments. Based on this, he actually left under his leadershipthe entire power block of the country.

Assume that about the same want to do and the Russian leader. For example, the Constitution will be amended, according to which the President should no longer be the Chairman of the security Council. Therefore, we can assume that in 2024, the post for life secured for Putin, and it will not be limited to any two cadenzas, no need to take into account international treaties.