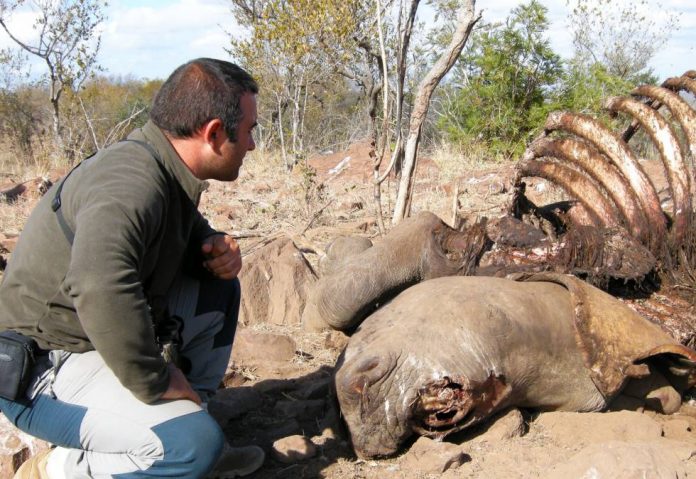 “The media are over 33,000 elephants are killed annually. That represents about 90-100 elephants that fall by the ivory a day in Africa”. Who provides these data, is José María Galán (Almonte, 1972), the guide of the National Park of Doñana that works to achieve the objectives of the National Plan of Fight against Illegal Trafficking and Poaching International (TIFIES).

With the launch of this project, approved in February of last year, Spain has positioned itself at the head of the EU in the fight against the traffic of species. Galán has seen a collected effort that I had spent years driving on your trips to the african continent. Its mission: to provide training and tools to local communities in their fight against poachers. The goal: early prevention from the ground, to make effective the existing standards and to strengthen international cooperation to reduce the number of animals with the trafficking mafias. Galán has been met with furtive face-to-face, though he adds, half-jokingly, half seriously, that you prefer to do it “face to back”. The hunters are armed, but he did not.

When encountered for the first time a rhino with the horn cut off in south Africa in 2007, it seemed to him “an anomaly, a disturbance, and did not understand how it could have happened”. The poaching of rhinos increased in a 7.000% during the following six years. Today, he says, “we have put in jeopardy to the species” and points out that: “Behind a dead animal poaching in Africa what there is, is blood. There is another thing. Is blood and suffering for money.”

What is paid for the rhino horn in the asian market (70,000 euros per kilo) exceeds the price of gold and more and more people willing to pay fortunes for “potions magical” or animals —alive or dead— converted into objects with which to demonstrate your purchasing power. The growth of this black market not only puts at risk the survival of a protected species, but causes side effects linked to corruption, criminal organizations and even to terrorism.

Jose Maria, in front of the remains of a rhino poached. Personnel file

Although the most visible face of poaching are the major african mammals, Galán recalled that “by 2030-2040 we will end up with 7,000 species” and that “80% of the species traded are vegetables, wood and plants”, also present in the TIFIES. He points out that the mammal most trafficked in the world is the pangolin: the 15% of the body weight of this species of armadillo is the shell, and recently seized a container with 15 tons of flake in Vietnam.

How just a guide of the Park looking for poachers in Africa?

If this almonteño is a key piece in the fight against poaching international is because few people understand like him the art of tracking. “I bring everything that I can to the conservation of physical and biological systems that keep us alive.”

When I was 10 years old, his father, a fisherman, caught unwittingly a loggerhead sea turtle between their networks and those who appeared for the fishery, to help them return to the sea was José Antonio Valverde, biologist and activist known as “the Father of Doñana”, in charge of the conservation of the marshes. That child that received from Valverde lessons of nature and life, he started to observe, take notes, draw traces, follow signs and train a new sensibility that will connect with your environment… Began to crawl.

One of the notebooks of Jose Maria Galan. Clara Paolini

Today, 30 years later, she bends down to pick something off the ground while strolling through the Park. It is a bee, and after you inspect it carefully you discover that you have a leg broken. Then place the hand behind the ear to hear the sound of a hornet’s nest. “The feeling is very atavistic because it is as if there is a thread that will connect with the animal,” he explains.

it is Not surprising that their skills would call the attention of the director of National Parks of south Africa when he visited the Park in 1997. “You need to get to know the bushmen, the tribe of the khoisan,” he said during the tour. And he was right. The experience that Beau lived in the Kalahari was a turning point: “After that trip I knew that track was not only a search for footprints; it was imbuirte, to mingle, to be the system, be the place that you have to keep. And that step, that is very western, to be, that is very african and it changed me completely”. The trackers of that tribe were not considered to be above other species, but that there were “primus inter pares, first among equals”. And that is the philosophy that Gallant struggle to establish.

In this time he has entered to form part of CyberTracker, an NGO that promotes the tracking and the use of new technologies for the conservation of biodiversity. He obtained the maximum range of the tracker and went from being a popularizer in Doñana to become a trainer for international crawlers. Now, your goal is not only to find the animal, but to the one who seeks to exploit the same: “What we did was to begin to change our goal, of tracking animals for conservation, the crawl tactical, the tracking of people and poachers”.

Cooperation in herd against the traffic

“Train, equip and employ such trackers that are local to that they, themselves, are trained to defend their territory. That has been the greatest achievement within the Plan TIFIES,” says Galán. It shows against the militarization of the fight against the traffic and although during the last few years in some areas of Africa, the rangers have received training paramilitary, clarifies that in the case of their crawlers “your weapons are knowledge, tracking, and create gathering opportunities for the authority to apply the law.”

The key to success is team work. Gentleman used an example learned from the observation of nature: leopards, which hunt alone, they get to catch their prey one out of every ten times. African wild dogs, however, they hunt in packs and their attack is lethal. Thanks to their communication systems, their strong family ties and the great collaboration between the members of this species, the probabilities of capturing their prey are 80%. This is the method that Gentleman is striving to expand. If the trackers are working together will have many more chances to hunt the poacher and the fight against trafficking will be more effective.

Remember that in the decade of the 80’s and 90’s was very intense poaching in the Park andalthough by that time it seemed impossible, almost overturned. “The Plan of Action is a good opportunity to show that when a country intends to do something together we can get those changes. We have already done before and what we will do again, for sure,” promises Galán.

do you Want to know the full story?

Almost a hundred elephants die each day at the hands of poachers who sell their ivory. José María Galán I was working as a ranger in the Park and learned to crawl with african tribes. Now the fight against international trafficking of species.

Diana Arias: “what For I suffered a stroke at the age of 23?” Leave the game and return to bet for life

I was born in the year 1972 and I do remember that from always I have been related to all kinds of wildlife. I am a guide of National Parks in Doñana and for a couple of years I am destined to a project in Africa that is the Plan of Action of Fight against the Illegal Traffic of Species.

In 1997 we received a visit from the Service of south african National Parks and the director told me that I would need to know the bushmen. The bushmen, through his way of connecting with nature, I engaged to me also.

After that trip I knew clearly that tracking was not a search for footprints, track it was much more; it was imbuirte, to mingle, to be the place that you want to keep. In 2007 I found my first rhino with the horn cut off, but unfortunately after that there was a peak huge up to our date in that practically we have put in a check to the species and everything has been simply because of the traffic, the traffic of species, particularly of the horn.

In the last five years mean that we are leaving are over 33,000 elephants are killed annually. That is almost 90-100 elephants a day in Africa who fall for the ivory. Gives like those elephants are 10 years old than 80.

I Started with an organization called CyberTrackers and is dedicated primarily to the training of tracking, specifically tracking of wildlife and then we have already adapted to the tracking of people, of poachers. So hire, train, equip those trackers local to themselves to be trained to defend their territory, with a lot of knowledge on the topic of chain of custody for that then that person is picked up to end in prison, if not no way.

This is the first year in which it reverses the increase of poaching. It is necessary to have consciousness, but if we want change there is only one action that is the act. That is, acts or there is no change.