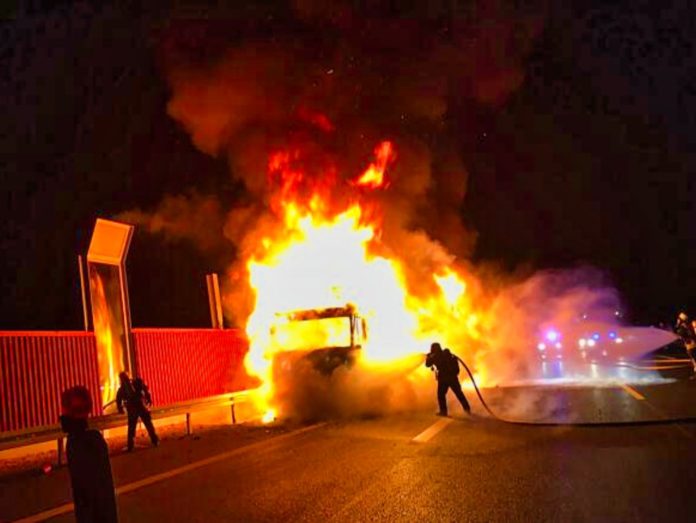 Flames hit three trucks on the highway after serious accidents! Woman is thrown out of the driver's cabin of one of the accident trucks, numerous firefighters on duty. Highway fully blocked until well into Tuesday!

High flames on the highway after two serious accidents on Tuesday night on the A7 near the Virngrund tunnel in Baden-Württemberg. Initially, a truck had apparently got into the guardrail between the Dinkelsbühl and Ellwangen junctions in the Ulm direction of travel due to excessive speed, causing the tank to be torn open and the vehicle caught fire. The driver was not injured and the truck burned out.

Traffic backed up due to the truck fire. A truck crashed into another truck at the end of the traffic jam and the vehicles involved also caught fire here. The flames hit the night sky and bathed the highway in a reddish light. There was a massive smoke development.

The driver of the truck driving up and two women who were in the driver's cabin were seriously injured. One of the women was thrown out of the vehicle in the impact, the second was freed from the wreck by the drivers involved.

Both trucks burned out completely. In total, property damage of around 300,000 euros was incurred in both accidents. The A7 had to be completely blocked in both directions until well into Tuesday.