Home Politics In Chechnya have come up with a way of dealing with violators... 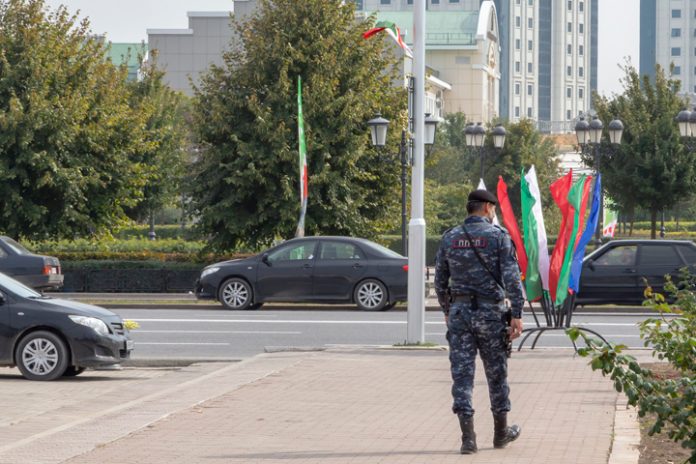 From 29 March in Chechnya operates quarantine. And so hard that the perpetrators are driving home polypropylene sticks. A person is considered guilty if he’s not wearing a mask, appeared in the yard, out on the street without good reason and so on. Armed patrols walk the streets of the cities are on the roads… Before the exact same sticks Chechen security forces beat detainees – members of the LGBT community, human rights activists… Without a mask to take to the streets of Grozny it is impossible, but it is in Chechnya do not sell. As in all country, they bought a long time ago, and no new supplies.

In the Chechen capital Grozny is now allowed only spelled out in it. Under any other pretext, in the city it is impossible to get. Meanwhile, two months ago in Chechnya did not have any safety standards in connection with the pandemic coronavirus. Local officials said the infection, in fact, is a common influenza treatment which is necessary with the help of honey and lemon. Especially in the Republic was not cancelled any events. For example, one was thousands of voluntary work and religious rites, were actively involved in the tourists from other regions of Russia… When the President of Russia Vladimir Putin has addressed the people, urging everyone to stay home, the head of Chechnya, Ramzan Kadyrov officially opened the brand new art House, the ceremony was attended by hundreds of people, including the elderly.

According on 30 March in Chechnya 9 people sick with mers. Of them as 8 people assessed as satisfactory, and 83-year-old woman is in serious condition. On 24 March she arrived in the Republic from Moscow, where he met with his daughter, recently returned from a dysfunctional country.

As in the rest of Russia, the views of the Chechens regarding the quarantine are divided. Some believe that restrictions on rights and freedoms associated with the need to survive a pandemic, so you need to be patient. Others accuse the authorities in the show and popitke once again to intimidate people to boast of its effectiveness to the Federal center. “Traveled to Chechnya, security forces are called upon to demonstrate confidence Kadyrov in his abilities on the background of the coronavirus, but in fact they only further scare people,” – said a resident of the Republic of Umar. “We have a strange people. Ask them to be careful because of the coronavirus, and they don’t listen. But when security measures are tightened, they begin to resent” – says another Chechen ISA.

Chechnya, of course, is not the only region where introduced almost total isolation of the population. In Moscow, the Moscow, Kaliningrad, Murmansk, Saratov region, Republic of Karelia, Zabaykalsky Krai… Surely they will be joined by other Federation subjects. However, there is no one sticks do not beat.

Vadim Mukhanov, senior researcher at the Center for Caucasus and regional security MGIMO:

– While strict quarantine in Russia only began to introduce, so the protests against it to speak still early. Judging by how the unfolding struggle with the coronavirus, it can last until the beginning of the summer, if not longer. During this time, a lot can happen, but it is too early to draw any conclusions.

In Chechnya long ago there was a very specific mode, in which a long time one is never surprised. The Republic stands out among other regions. However, the conditions of a rigid self-isolation in it, in General, coincide with the fact that he decided to use in Moscow and the Moscow region. The difference can only be implemented in practice. But we are not talking about the mass beating of people in Chechnya, if that’s the case, it is sporadic. Quite possibly, sticks got in order to intimidate potential intruders and to discourage them any desire to go outside. Probably would be enough, and traditional weapons, but then their role could be played by the desire of the subordinates of Ramzan Kadyrov to curry favor with the boss of the Republic, in particular, to literally fulfill his wish. In addition, we have nothing to compare it to. We don’t know how the security forces will act in the Moscow and Murmansk regions, to subdue the local population.

Ahmet yarlykapov, an expert on the North Caucasus:

– first, among all the republics of the North Caucasus Chechnya the first paniced because

coronavirus. In particular, the people all swept from the shelves. Second, the measures taken by the authorities of the Republic, hard but consistent. Security forces can actually walk the streets, armed with sticks. There’s plenty of photo and video verification. On the other hand, there is no evidence that the Chechen police beat violators of the quarantine. However, for local residents, such a rotation would not be unexpected.

as for how the Chechen authorities to comply with the isolation which they themselves advocated, they are no different from their counterparts in the rest of Russia. Politicians, Ministers and so on go to the streets, participate in events, avoid quarantine after returning from a trip… This problem is not Chechnya, but the whole country.”

Read also: “As police struggle with the violators of the quarantine: sticks, paint on his forehead, drones”