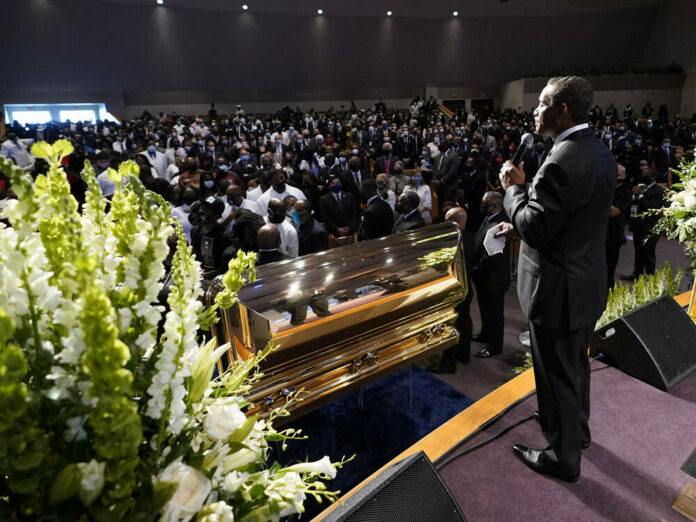 Around 500 invited guests said goodbye to George Floyd at a funeral service in Houston on Tuesday. The African American died almost two weeks after a brutal arrest. A white policeman had been kneeling on Floyds’ neck for almost nine minutes, complaining several times that he couldn’t breathe.

At the beginning of the service in the “Fountain of Praise” church , pastor Mia K. Wright said, “CNN” , “This is a moment of connection.” According to tradition, the service was “a celebration of Floyd’s homecoming”. You want to celebrate the life of the deceased.

In the course of the funeral service, former US Vice President Joe Biden (77) was switched on by video. Biden said, among other things, that the US must not turn its back on the current situation. You can’t leave the moment behind “and think that we can turn away from the racism that stabs us right into the soul”.

In particular, Biden also addressed Floyd’s six-year-old daughter Gianna. “I know you have a lot of questions,” said the politician. “No child should have to ask questions that too many black children have had to ask for generations. How so? Why is papa no longer there? ”

Other speakers also had their say, including family members Floyds or Sylvester Turner (65), the Mayor of Houston. Turner named June 9th in the US metropolis “George Perry Floyd” day.

Following the mourning ceremony, Floyd’s coffin is to be brought to the neighboring town of Pearland. According to US reports, Floyd is said to be buried next to his late mother after a procession. The Pearland police warned that the procession would be delayed by about an hour and that viewers should be in the shade because of the prevailing heat.

On Monday, more than 6,000 people said goodbye to the Floyds coffin held in Houston. The first funeral service for the deceased was held in Minneapolis last week. Several funeral and memorial services followed. The burial itself should take place in the closest family circle.