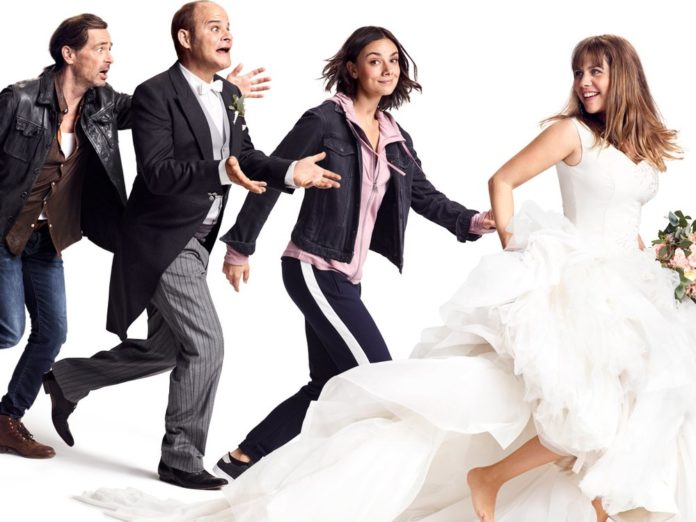 The start of “Berlin, Berlin – Der Kinofilm” on March 19 had been “postponed indefinitely” due to the Corona crisis. Now there is a surprise for fans of the cult series: The streaming service Netflix will be showing the film from May 8th. The series can also be seen again on Netflix.

15 years have passed in the film since the series finale. Lolle (Felicitas Woll, 40) wants to get married, but Sven (Jan Sosniok, 52) of all things intervenes. He bursts into Lolle’s wedding to Hart (Matthias Klimsa, 49) and makes her a marriage proposal in front of all guests. Lolle escapes completely confused. After an emotional freak, she ends up in court and is promptly sentenced to social lessons at a school. There she meets Dana (Janina Uhse, 30), with whom she has one thing in common: complicated male stories.

After a crazy party night in the Berlin clubs, the two wake up in a car the next morning, but not in the German capital, but in the Harz Mountains. Lolle wants to go back immediately. But the trip to Berlin turns into a fun road trip that turns out to be a journey for both friends that changes their lives forever …

“Berlin, Berlin” was a great success for ARD: the series was awarded the International Emmy, among other things. Over four seasons, from 2002 to 2005, fans followed the trials and tribulations about city chaot Lolle. Not only her old colleagues shine at Felicitas Woll’s side in the cinema: ex- “GZSZ” star Janina Uhse is also part of the party. There are also prominent guest appearances by, for example, Armin Rohde, Detlev Buck, Christian Tramitz, Kailas Mahadevan and Gitta Schweighöfer.