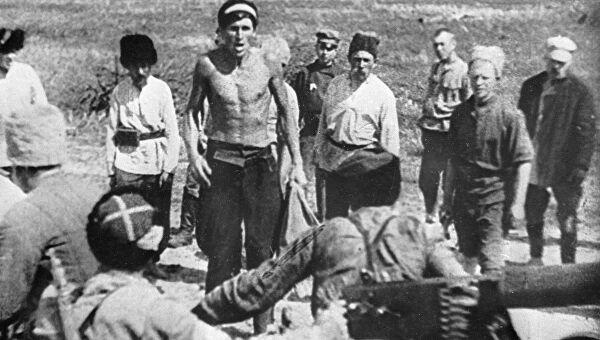 Counting the losses of the peoples of Russia during the revolution and civil war always causes great difficulties due to the lack of a systematic account of the population at this time and the disappearance of many documents. Because of this, you can relatively accurately estimate only the total demographic losses. It is difficult to separate the losses caused by the revolution and civil war, from losses caused by the First world war, since both periods overlap. Even more difficult to count the number of victims is accounted for by specific people.

Usually cite some figures of losses of the population of the former Russian Empire. Killed and died of wounds in hostilities – 2.5 million, as a result of the terror all sides were killed 2 million died of starvation and epidemics 6.5 million people, another 2 million emigrated. Total loss of 12.5 million of These figures, and especially their distribution in the genera of death, is largely arbitrary, their counting accuracy does not hold water.

the study, prepared under the editorship of candidate of military Sciences, General G. F. Krivosheev in 2001 (“Russia and USSR in wars of XX century”), the total number of combat losses of the red army killed or died of wounds in 1918-1920 is estimated in 250 thousand, in 1921-1922 – 25 thousand it is Quite possible that not all the victims were accounted for, especially in the beginning of the civil war. But given that the fighting was until the summer of 1918, low-intensity, it is unlikely the total number of dead in the fighting of the red army exceeded 300 thousand. Since there is no reason to believe that the loss of the anti-Bolshevik armies could be significantly more, it is correct to take the total number of combat losses is the same, that is, 300 thousand, and all together – 600 thousand.

This, of course, not counting those who were killed “in terror”, as well as unarmed civilians. But how much has been destroyed the civilian population, many died from hunger and disease, how many emigrated – can only be assessed indirectly. Most importantly, we do not know from what source the strength to build.

By 1914, in the territories, amounting in 1920-e years of the Soviet Union (without Poland, Finland, Baltic States, Western Belorussia, Volhynia and Bessarabia, but given the Khiva and Bukhara), lived around 142-143 million people. However, in 1914-1915, part of (some unknown) of the population leave the Russian army areas were evacuated inland. As some (again unknown) people emigrated from Russia during the civil war. The first all-Union population census of 1926 counted 147 million people. From the comparison of these figures, given the pre-war demographic growth, usually come, estimating the overall decline in the population from unnatural causes in 1917-1922 11 to 15 million How many of those millions fall on the dead and the dead, and how the share of emigrants is unknown.

But for Russia, the loss will be considered to be any population decline. It is clear that the most numerous people of the Empire Russian (great Russians before 1917) suffered the largest absolute numerical losses. We are unable to accurately estimate these losses as a percentage of the number of people above or below all-Russian, however, General considerations allow to think that they were, in any case, not below. There is no way to estimate the proportion of Russian population of the Empire in 1914, so would have to be based on their share of 1897, when she was 44,35%. In this case, the total Russian population in 1914 was 73.5 million Taking the loss rate at the maximum 10% of the population dead or emigrated Russian in Russia lost during the years of revolution and civil war, 7-7,5 million.

the Civil war in Ukraine was marked by greater intensity in comparison with most other regions of the Empire disintegrated. This suggests that the demographic pOteri here could be higher than the average for the Empire, but counting specific numbers is difficult. Can be compared to Russian losses. In 1926 the Russian population in the USSR was 77.8 million, that is compared to the 1914 Russian has increased by 5.9%. The number of Ukrainians in this period has decreased from 29.5 million to 29.2 million given the fact that approximately half a million Ukrainians lived in Poland ceded to part of the Volyn province and 600 thousand in ceded to Romania of Bessarabia, the total number of Ukrainians within the borders of the USSR increased over these 12 years is 6.1%. Taking into account inevitable errors in counting, it can be stated that the relative losses of Ukrainians for 1917-1922 was no less than the Russian. And most likely more than the Russian, less the Cossacks.

the Cossacks were an ethnic group, the Bolsheviks exposed the purposeful extermination on the basis of the decree of the Central Executive Committee of “decossackization” on January 24, 1919. Called in the literature a variety of numbers of victims of terror, differing by two to three orders of magnitude. Note that most of the Cossacks emigrated with the white army, and that the degree of decossackization in various Cossack areas was uneven. According to the estimates of the emigre historian and demographer M. S. Bernshtam (“the Parties in the civil war”, 1979), the number of the don Cossacks in Russia in the civil war decreased by 70%. Considering that before the revolution was one and a half million don Cossacks, died and emigrated, a total of not less than one million. The don Cossacks have undergone the greatest genocide by the Bolsheviks. Total demographic losses of the Russian Cossacks in the civil war, it may approach frequently referred to in connection with the decossackization maximum figure of 2 million out of the total number of the Cossacks before the revolution 4 million.

the Electronic Jewish encyclopedia indicates that the victims of the pogroms of 1917-1920 (practiced mainly in the Ukraine, Petlura and dencinnami) were more than 100 thousand Jews, a few tens of thousands of Jews during this time emigrated. However, when in 1914, in the Russian Empire lived about 4 million Jews, in 1926 in the USSR and 2.6 million However, we must remember that the USSR has not entered the regions of the Empire, where lived the bulk of her Jewish population – Poland, the Baltic States, Western Belarus, Bessarabia. Many Jews emigrated from the Soviet Union in the early 1920s years.

the Kazakhs (before the revolution called the Kyrgyz-kaysaki) in 1897, there were 4.1 million In 1914, given the natural increase of the Kazakhs of the Empire was about 5.5 million Kazakhs began to bear heavy losses in 1916, when he rebelled against Imperial authorities. A considerable part of Kazakhs, escaping from the repression of the first Imperial administration, then the Bolsheviks, went to China. The 1926 census revealed a decrease of the Kazakh population on the same territory by almost 40% to 4 million.

Featured articles Share: Comments (1) Comments on the article “What people suffered the most terrible losses in the Civil war” 07.03.2020 at 21:18 Semser Assa writes:

Genocide of the Kazakhs in the Soviet period on the face.