Home Breaking The biggest tragedy after the war: what happened at the Minsk radio... 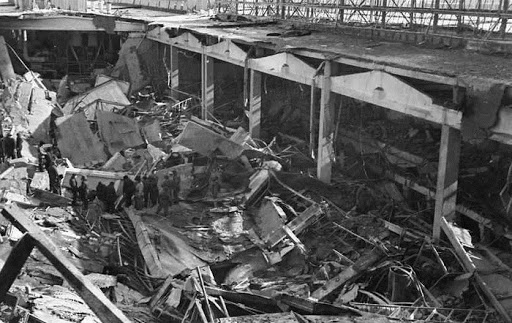 History 25/03/20 the Biggest tragedy after the war: what happened at the Minsk radio factory in 1972

the number of deaths and scale of destruction, the tragedy at the Minsk radio plant that occurred in March 1972, was the largest since the great Patriotic war. According to some reports, killing more than 100 people. As a result of the investigation revealed that the cause of the explosion was the dust.

Explosion and elimination of its consequences

according to Alexander Borin in his book “Law and conscience”, in March 1972 in the Central Newspapers of the country had little notes, informing them about the accident, which occurred in the shop of the Minsk radio plant boxes. No details in the press was not published: only mentioned that in the tragedy are both wounded and dead. As it turned out later, the evening of 10 March 1972 in one of the buildings of the company where the case plant, the explosion occurred. To determine the exact number of victims at the time was not possible, since many people were under the rubble.

Rubble was dismantled a few days. From under the rubble of the building people took dozens. According to the Belarusian journalist Slawomir Antonovich, who has studied the materials of the case about the explosion at the Minsk radio factory, the crash injured 250 people, more than 100 died. The number of victims has risen in part because that called for the crash site, firefighters did not know what to do. The fact that an incident of this magnitude was the first in the history of the Republic of Belarus from the times of the great Patriotic war. Firefighters doused the debris with ice water. Meanwhile, the temperature that day stayed at around -12 C. Maybe it’s also worth someone’s life.

the cause of the accident

While assorted debris, to Minsk there has arrived the Commission from Moscow. Its members were going to establish the cause of the tragedy. At this time the city had spread the most incredible rumors: some were convinced of sabotage. Petr Masherov, the First Secretary of the Central Committee of the Communist party of Belarus also refused to recognize the errors of the leadership. If you believe the author of the publication “Petr Masherov. Falling up” Leonid Drozdov, Masherov even suggested that the explosion at the factory is an echo of the war. According to the head of the Republic, some tunnels used to house military warehouses with ammunition that could explode. This Masherov told the chief of Department Nikolay Homewo.

But Nicholas Homel held a different version. He claimed that the reason – an imperfect system to clean dust generated while sanding the rails. This dust was extremely dangerous and snowshovels at a certain temperature. On that March day rule the dust concentration was exceeded in 13 times. But long before the accident Homew wrote about the error in the project of the shop of the Leningrad specialists, and in response received some replies. Writes Leonid Drozdov, that filters the cleaning work is not satisfactory, reported to the Director of the Minsk factory Zakharenko and the chief engineer Zamoyski. The Director suggested Zamoyski “not to go into that chemistry.”

the Punishment of perpetrators and the number of victims

during the investigation, the words of Nikolai Homepa and energy Semyonkovo confirmed. Here and in the publication “labour Protection and social insurance” (Profizdat 1991) indicated that the accident at the Minsk radio plant occurred because of gross errors in the project. Homew knowingly wrote to the Northern capital: namely the Leningrad Institute designed the equipment for the plant. Detention was the Director of the mentioned Institute and some staff, as well as the Director of the plant Zakharenko, chief engineer Kutzer and foreman Homev. All the perpetrators were sentenced to various terms from one year to three years took into account age, presence of children and government awards. Subsequently, Nicholas Homepa the conviction was removed.

However, the point of this story is not delivered until now. The fact is, that to this daydata on the number of victims of the explosion at the plant in various sources differ. So, in the publication “labour Protection and social insurance” refers to the 114 victims. According to estimates Nicholas Homepa in the accident said goodbye to the lives of 106 people. And Vasily Sharapov in his memoirs, “Chapters of life” page wrote: “After clearing the area the exact number of victims. They turned out to be 46 people. Hastily dug graves 48, and this gave rise to rumors that the authorities hide the true scale of the tragedy.”