Home Breaking The explosion in the Soviet school: as a teacher of NVP killed... 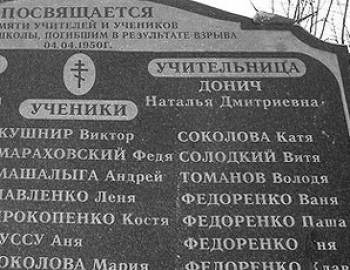 History 25/03/20 Explosion in the Soviet school: as a teacher of NVP killed 20 children

In April 1950 in one of the rural schools of the Moldavian SSR explosion. The bomb was brought to the class teacher. What happened with the teacher before he decided on such desperate step?

the Explosives were in a gift

April 4, 1950 in the village Gizka that was near the city of Bendery, Moldovan SSR began as usual. A few students hurried to the only one around seven years. The teacher of initial military preparation too hurried to school. In his hands he carried a small bundle. Someone asked him that in the paper. He replied: “a Gift for Natasha”.

During a literature class military instructor ran the class, which at the time was a lesson. He grabbed the teacher Natalia Dmitrievna Donich and dropped explosives on the floor. The fuse had already been ignited. The man told the children to leave the premises. However, students do not have time. The cord was burned too fast.

the Reason for the monstrous act of the teacher was commonplace. Shortly before the tragedy the teacher of CWP began to see the same Natalia Donich, a lesson which he broke with a bomb. Husband Donici died in the war, so the woman gladly accepted courtship to the next man. However, she soon learned that the military instructor in another city there is a legitimate family and broke up with him. The man flew into a rage and began to pepper his beloved with letters threatening content. But Natalia was adamant. Then the teacher stole in DOSAAF, where he also worked, the explosives and brought it to school.

the events of that terrible day remained “Classified” until the beginning of 2000-ies. They managed to recover only because of eyewitnesses, on the basis of which the journalist and writer Nikolai Fedorovich Koritnik wrote the book “Exploded love”.

12 pounds of TNT destroyed the school, built of Adobe brick almost completely. The explosion and collapse of the building killed 22 people, including 20 children and 2nd teachers: teacher Natalia Donich and the teacher Nikolai Ivanovich Danilov.

In fact, that day had died, and another teacher who brought to class a explosives. However, the villagers decided to erase from history who in one fell swoop took away so many human lives. That is why the stone is installed later in 2007 in memory of the tragedy, the name of the band does not appear.