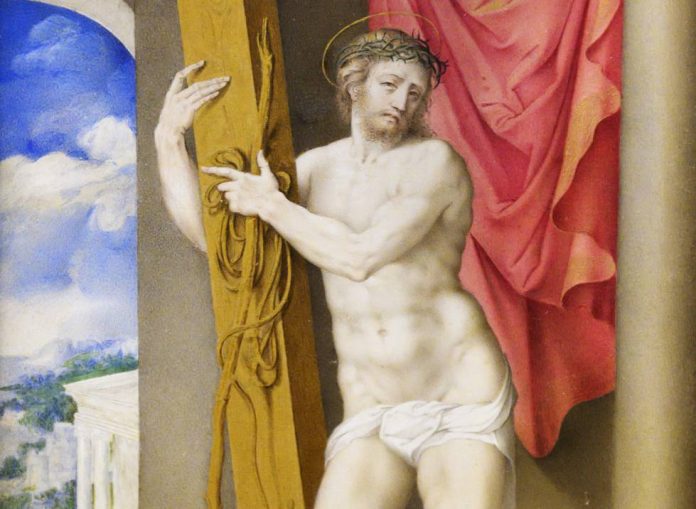 The Prado Museum has received the deposit of a miniature of the venetian artist Giulio Clovio (1498-1578), donated to the American Friends of the Prado Museum by the collector Pilar Conde Gutiérrez del Alamo, sister of Rosa Conde, exportavoz of the Government with Felipe González. The painting has remained in a private collection in Spain until shortly before being acquired by the donor. The scene depicts the legend of the risen Christ, a copy of a model sculpture of two meters of height done in marble by michelangelo, four decades before, and which is preserved in the basilica of Santa Maria sopra Minerva, in Rome.

The Christ with the cross, 1565, is a tempera and gold on parchment mounted on a table less than 20 inches in height. The Lazaro Galdiano Museum with a preserved Holy Family with saint Elizabeth and the infant saint john the baptist, of 1556-1557, made with the same technique and almost the same size. The only trace that had the Prado museum of Clovio, who was a friend of El Greco, is a miniature of devotion (The Virgin of the milk) on a plate in ivory, anonymous, but with an application of the own colour of the school renaissance illuminators implanted by Clovio.

In the second edition of his Lives, Giorgio Vasari dedicated to this painter, one of his biographies of artists living, including along with Titian, Sansovino, Primaticcio, and Leone Leoni, after michelangelo. The historian showed unconditional of the work of the miniaturist: “There has never been, nor perhaps will be in many centuries, a miniador or painter of small things, if we want to call it, more extraordinary, nor more excellent than don Giulio Clovio, as this has overcome much to all who have been exercised in doing this class of paintings.”

The artist, who has effectively devoted his career to the illumination of codices, paintings of small format, miniatures and drawings, was praised by Vasari thanks to his masterpiece, the Book of hours of Alexander Farnese (1546). The volume contains 26 miniatures with full-page (episodes from the Old and New Testament) and 37 sheets with fringes miniadas, and was in the power of Clovio until months before his death, when he gave it to cardinal Farnese.

“we Can say that don Giulio has surpassed in this specialty to the ancient and the modern, and which in our times has been a small and new michelangelo,” wrote Vasari. By comparison, defined Clovio as the “new” michelangelo of the miniature, because according to the chronicler no one in his art had been able to reach it. However, in the nuance of “small” unveils the change of taste in favor of painting and neglect of the thumbnail.

The ability of Clovio was to recreate the way the monumental michelangelo in small format. In addition, he was an outstanding adviser in matters artistic of the cardinal Alexander Farnese. Hence, the November 16, 1570, he referred to a letter of recommendation from The Greek. Two years later, the painter’s cretan painted the portrait of the miniaturist with his masterpiece, the Book of hours of Alexander Farnese, between his hands.

links of Clovio with the Spanish heritage does not end there, because your way was decisive for the formation of the so-called “school escurialense” thumbnail, in the service of Philip II. On the basis of Vasari, Clovio, while he was in Rome in 1516, he learned “how to use colors and inks to the rubber and to the temple,” by Giulio Romano, who recommended him to specialize in the thumbnail.

Ten years later Clovio focused on his artistic career and “began to draw and to strive to imitate with determined effort the works of michelangelo,” writes Vasari. Since that time, and thanks to the remark that he had of the Sistine Chapel, it would be applauded for the skill he had of representing figures, tiny, as if they were giants.