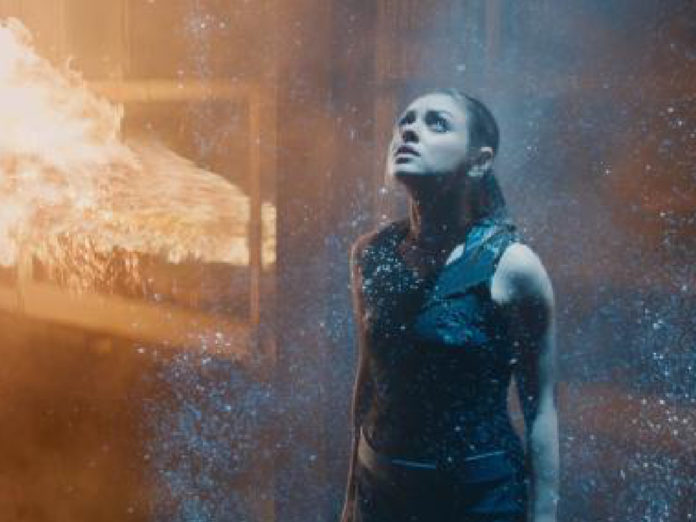 Jupiter Jones (Mila Kunis) is a cleaning lady, but fate wants it differently. When she tries to donate eggs, she is attacked by extraterrestrials who seek her life. The genetically produced ex-military hunter Caine (Channing Tatum) comes to her rescue. It turns out that she has royal genetics and is part of the most powerful family in the universe. However, this entails great dangers.

There is no special treatment for celebrities in the midwife practice of Toni Hasler (Leo Reisinger). Reluctantly, he takes over the birth preparation of the heavily pregnant player Kathy (Jessica Matzig). Toni is not impressed by the fact that her husband Walli (Artjom Gilz) is a national team player, world champion and superstar of the Munich soccer team. Thanks to his self-confidence, the childbirth assistant gains the necessary respect after initial turbulence. As soon as the child is born, Toni becomes an indispensable helper for Walli.

A confused woman attacks passers-by with a knife in broad daylight. Then she collapses dead. Dr. Sommerfeld (Christina Rainer) warns Voss (Jan-Gregor Kremp) and his team at the scene of the crime to touch the body. Because the woman was killed with the sneaky, odorless and tasteless poison lead acetate. But that’s not all: It quickly turns out that Voss and his investigators are dealing with a serial offender.

Rural idyll: a nice house, a loving young mother, a cute baby. Suddenly shots are fired – the young woman does not survive. Her husband, the doctor André Collmann (David Rott), can explain the attack as little as Chief Criminal Investigator Judith Mohn (Christina Hecke) and her colleague Freddy Breyer (Robin Sondermann). Then a friend of Collmann’s is kidnapped – and a video of the perpetrator is received by the police. He demands “the truth in the Nadine Abeck case”. The investigation led Mohn and Breyer to a case that had long since been closed to the police.

After the zombie apocalypse, the remaining people are in bad shape. Undead stagger through the world in search of food: human brains! The victims’ memories are also eaten. When Zombie R (Nicholas Hoult) eats Julie’s friend’s memory, he falls madly in love, never before known feelings awaken in him. Can it go well?