Home Entertainment What has changed in the churches following the call of the Patriarch:... 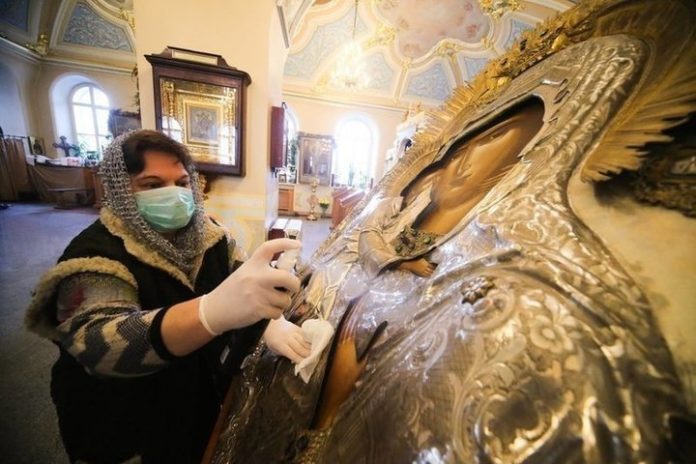 Orthodox priests, Patriarch, during the preaching, though not strongly, but began to recommend the older parishioners to stay home “to avoid hitting the deadly virus”. As noted by the clergy, the most important Sunday service can be replaced by home prayer. Moreover, “truancy” for cause will not be considered a sin. In the Russian Orthodox Church reminded that in case of emergency – for confession, communion or last rites – the Orthodox can call the priests to the house.

Despite the calls to stay at home, people in churches did not become less: present as young people and pensioners. Furthermore, many were dissatisfied with the change in rites, which affected all the churches.

has Undergone changes and the most important sacrament in the Liturgy – the sacrament (him, recall, the secular society had the most claims). Now after communion everyone in the parish priests to disinfect used a spoon dipped into a container with alcohol or alcohol wipe it with a napkin.

among other things, the communicants began to distribute disposable wipes, which they dipped the lips after receiving the sacrament (previously it was done by the priest using special scarf). Used napkins are invited to leave the temple or to burn.

churches also refused to kiss the chalice after communion, and the veneration of the cross and the hand of the priest after the Liturgy. However in some churches the priests then found out – after the service, instead of the kissing of the cross, began to attach the cross to the heads of the congregation, or just make the sign of the cross the crowd banner.

While ordinary workers of the temple who sell candles and icons, as well as the host notes for ZDravie and for the peace, necessarily began to wear medical gloves.

it is Noteworthy that in a number of churches in Moscow have announced that next week will be the prayers that happen during epidemics. As specific prayer from the modern coronavirus is not, then will sing the prayer in common prayer called “the bubonic plague”, and officially from the “disastrous and deadly plague of an ulcer”.

Read also: “Posted a video of massively indulging in revelry of Muscovites in the midst of the coronavirus”

Watch the video on the topic: “the Priest explained why you should not go to Church: live” 02:03