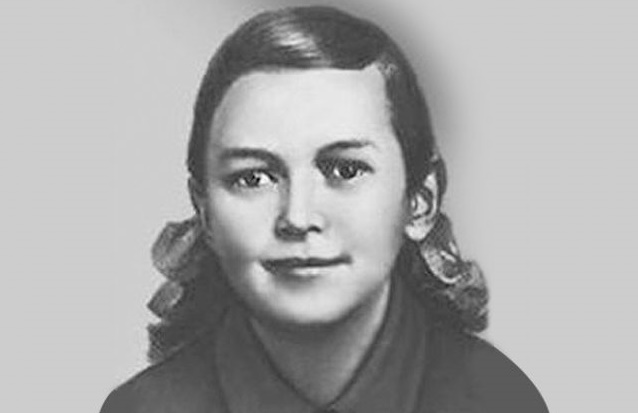 In 1942, in German-occupied Belarus, near the village of Obol in the Vitebsk region is located in the center of training of officers of the Wehrmacht. There came the gunners, pilots and tank crews out of Leningrad, Novgorod, Orel.
As expected, was in the training centre dining room for the cadets, German neat and cosy as possible the conditions of war. Prepared for the officers of the German chef, and the dirty work in the kitchen was performed, as usual, various “subhuman” from the local. Among them, bright-eyed girl with pigtails.

None of these important Germans, dashing officers, past dozens of battles, covered with crosses and medals, could not imagine that death awaits them on the battlefield, but here in Eboli, in the image of a smiling Belarusian girls.

Instead of a vacation – the occupation

In Belarus Zina and her younger sister Galya came from Leningrad in June 1941. Their grandmother lived in the village of Zuya, near Eboli, and daughter of the worker of the Kirov factory of M. N. Portnov had to spend the holidays. Zina was in the seventh grade, a Gal just went to school.

So the girls were in the occupied territory.

In 1942, sisters Portnova became members of the organization “Young Avengers”. Basically it consisted of students Obol middle school, which was led by a twenty-year Euphrosyne of Zenkov. Zeena soon earned the trust of comrades, and it was included in the composition of the steering Committee of the organization. The Gal appointed messenger.

the activities of the “Young Avengers” was no less vivid and effective than the activities of the organization Krasnodon “Young guard”. Just a young Belarusians was lucky a little bit less than their Ukrainian comrades in the struggle, and of their heroism didn’t recognize the writer, a talented and known as Fadeev. But that doesn’t mean hit fought the enemy the young partisans from Belarus less bravely than the Ukrainian heroes.

among the significant diversions “Young Avengers” should be attributed to “treat” that Zina Portnova was organized for the Germans.

Zina got a job in the canteen for the cadets. At first, her and were not allowed near the kitchen stoves, where food was cooked, Zina mopping the floors, taking out the slops and do other dirty work. Then I got the dishwasher. Zina, who had already become familiar enough in the kitchen were allowed to wash boilers and plate.

And then came the day, when Zina was able to seize the moment and pour into the pot of soup a huge dose of rat poison. Two days later at the local cemetery buried almost a hundred Germans – elite soldiers from among the best officers.

the Investigation began as soon as we found out a mass sickness of the Germans after lunch in the dining room, and the doctor made the diagnosis “poisoning”. Head chef, frightened by the scale of the sabotage, and well knowing that, if you find his negligence, swore up and down that close and not allow anyone from the local to the pots. However, to check the new dishwasher told me to eat soup. Zina, without batting an eye, scooped up a spoonful and swallowed, then again and again.

she was in a fog, struggling with bouts of abdominal pain and nausea. Grandma rushed to unsolder granddaughter buttermilk and decoctions of herbs. That, and good health and the fact that she ate it all the same not a whole plate, rescued the zine. The girl survived.

Despite the fact that this time a direct suspicion of Zina did not fall, the detachment of “Young Avengers” decided that she and Gale have to go to the partisans. So Zina became a fighter of the guerrilla unit named after Voroshilov. She was appointed in exploration and Galya were determined to help in the field hospital. From August until late autumn 1943 Zina Portnova did the job of the command unit, each time safely returning from the most difficult tasks. But closer to winter in Eboli was shot several children of “Young Avengers”. It was clear that the village was declared a traitor. Guerrilla commander instructed zine to communicate with those who survived. It did the job, but on the way back, ran into an ambush.

the way of the cross partisan

she was captured and sent to Obol, where the girl was engaged in the Gestapo. About sabotage in the dining room not forgotten, and Zina was listed as the Prime suspect.

During the interrogation, the Gestapo put his gun on the table, apparently to intimidate the girls. When he was distracted by a noise in the yard, Zina grabbed a gun and shot the investigator. The shots ran into two Germans, of which the partisan is also put in place. Zina jumped from the building and rushed to the river, hoping to cross it and escape into the woods, to the partisans. However, the Germans shot her in the leg from a machine gun. Zina was seized and sent to Vitebsk prison.

Zina was tortured for a whole month. She was tortured so that you might doubt the adequacy of these men, grown men, officers who had inflicted such torture on a young girl.

Her skin burned with a hot iron, they drove needles under fingernails, she methodically beaten. She even cut off the ears. Torture lasted more than a month, but Zinaida Portnova was not given one.

in the Morning of 10 January 1944 Zina brought to execution. She went, stumbling blindly, because the Germans had taken her eyes. The hair of seventeen girls were all gray.