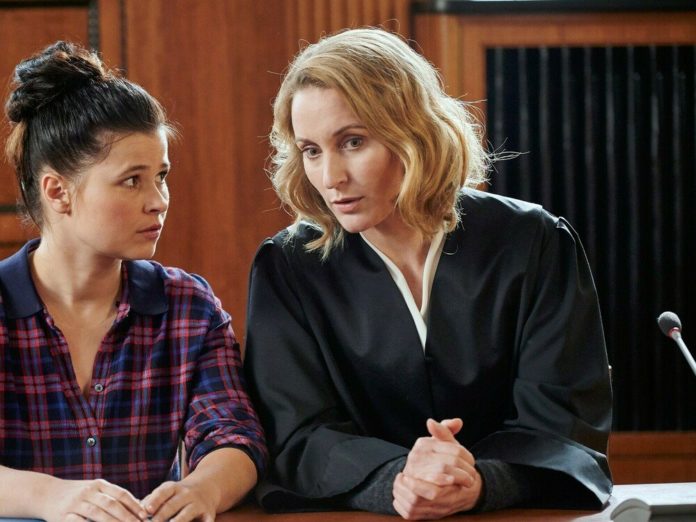 The series of lawyers “Die Heiland – Wir sind Rechtsanwalt” starts on Tuesday (April 28th) at 8:15 p.m. in the first in the new season (six episodes). After the unexpected death of season one lead actress Lisa Martinek (1972-2019) at the end of June 2019, the production found the actress Christina Athenstädt (born 1979) the new actress of the blind lawyer Romy Heiland. In the credits of the first episode of the new season, “a blackboard with the lettering ‘In memory of Lisa Martinek'” will be shown, “the station said on request from spot on news.

“The series will always be connected to Lisa Martinek,” confirms her successor Christina Athenstädt in an interview with the news agency. Among other things, she tells about the emotional filming and how she even prepared for the role of the blind lawyer.

Christina Athenstädt: I was traveling a lot in Berlin with a mobility trainer for the blind. He showed me how to handle the long stick (white cane). He also explained to me what aids are available in road traffic and what else you can use to orient yourself. We also practiced with a blindfold. I also traveled a lot with Pamela Pope, the real role model for the figure. I was with her in the office and was allowed to accompany her to the court. I have seen a lot. In addition, she explained to me the many technical devices that she uses. It was all very, very exciting.

Athenstädt: I was very impressed with how she remembers where things are. How she reaches for a glass on the table that she had to feel ten minutes earlier. I think she has very special mind maps, a special memory for such things. It is also very interesting how she remembers ways to be able to cover them without an accompanying person. What impressed me most was the courage with which she approaches people. When she comes into a room, she doesn’t always know whether someone is there. She then simply asks loudly into the room or says “Hello” so that something comes back.

Athenstädt: I made a conscious decision not to watch the first season. I had already seen two episodes during the broadcast, but in preparation I decided to approach the role as I would otherwise do it. I accepted and learned a lot from Pamela Pope. I think there is a lot of overlap between the first and second season, but also a lot that is completely different, precisely because I am a different person.

Athens city: The grief was of course felt. It was clear to everyone involved, however, that sadness should have its place and no one had to suppress anything. The series will also always be associated with Lisa Martinek. In this sense, the producers also tried to continue it.

Athens city: Yes. But when I realized how sensitive the production is to everyone involved and their fears and concerns, I was encouraged to agree. And I did not regret it.

Athenstädt: Yes, I watched one of the films and was actually very enthusiastic. Of course, I also found it exciting to see how he implemented blindness.

Athens city: This constellation of figures results in a lot of fun in the series. And I think Frau Heiland is very lucky with Frau Holländer [Anna Fischer]. And vice versa. They complement each other perfectly.

Athenstädt: Yes, it will actually be exciting …

The blind lawyer Romy Heiland (Christina Athenstädt) and her assistant Ada Holländer (Anna Fischer) are now attuned to each other … well, almost. Romy is annoyed that Ada is still late or is constantly interfering in client discussions. When Ada spontaneously wants to take three weeks of vacation, Romy realizes how much she is now dependent on her. She suggests that she train her to become a paralegal. A completely new idea for Ada. Will she have stamina and discipline? And Romy?

Romy decides to go back among people on the advice of her mother Karin (Peggy Lukac) and takes a dance class. Prosecutor Rudi IIlic (Aleksandar Jovanovic) is assigned to her as a partner. In court, the ambitious colleague takes great pleasure in measuring himself rhetorically as well as argumentatively. Ada and her brother Ringo (Tim Kalkhof) were again torn when their father Peter Holländer (Rolf Kanies), who left the family when they were children, suddenly stands at the door and asks for help. Does he deserve her loyalty?