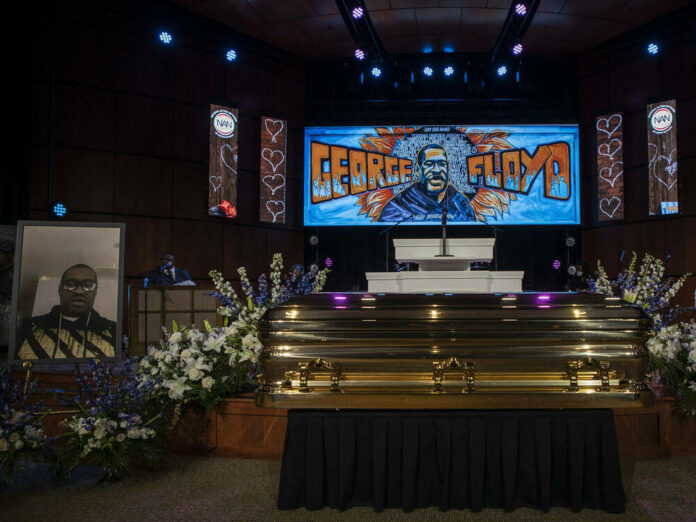 Family members, celebrities and politicians commemorated George Floyd during a funeral service in Minneapolis. The African American died after being brutally arrested by several U.S. police officers. According to reports by the US news broadcaster “CNN” , several brothers Floyds, his cousin Shareeduh and the civil rights activist Rev. Al Sharpton (65) spoke among others.

“The reason we could never be who we wanted to be and dreamed of being was because you kept your knees on our necks,” Sharpton said, according to the New York Times . It was time to get up in Floyd’s name and say, ‘Take your knee off our necks.’ ”A white policeman had pressed his knee on Floyd’s neck for eight minutes and 46 seconds, who had repeatedly complained that he was get no air.

The funeral service was therefore only accessible to family members and invited guests, but according to the daily newspaper hundreds of people would have gathered in front of the chapel where the memorial service took place. Some of the seats in the chapel are reserved for actors Kevin Hart (40) and Tiffany Haddish (40) as well as for Martin Luther King III (62), the eldest son of civil rights activist Martin Luther King Jr. (1929-1968) been. Also present were Senators Amy Klobuchar (60) and Tina Smith (62), Minnesota Governor Tim Walz (56) and Jacob Frey (38), the Mayor of Minneapolis.

Further commemorations will follow in the coming days. The funeral of Floyd’s closest family is planned for Tuesday. It was recently announced that former boxing professional Floyd Mayweather (43) will cover the funeral expenses.

Since Floyd’s death there have been numerous protests in the USA – but also worldwide – which have also been supported by numerous celebrities. Among others, the singer Ariana Grande (26) and the actors John Cusack (53), Ellen Page (33), Jamie Foxx (52) and John Boyega (28) took part in various protests.