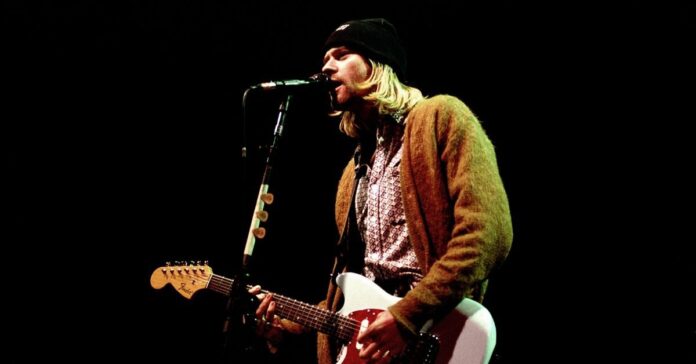 Hardly any acoustic guitar is as famous as the Martin D-18, which Kurt Cobain played at Nirvana’s legendary MTV Unplugged concert shortly before his death. Now the cult gong comes under the hammer and should bring millions.

It is said that it is the last acoustic guitar that Cobain (1967-1994) played at a concert. This is one of the reasons why the price is even estimated at over one million US dollars. The Nirvana boss played the instrument at the legendary “MTV Unplugged” appearance in New York in 1993, five months before his death. 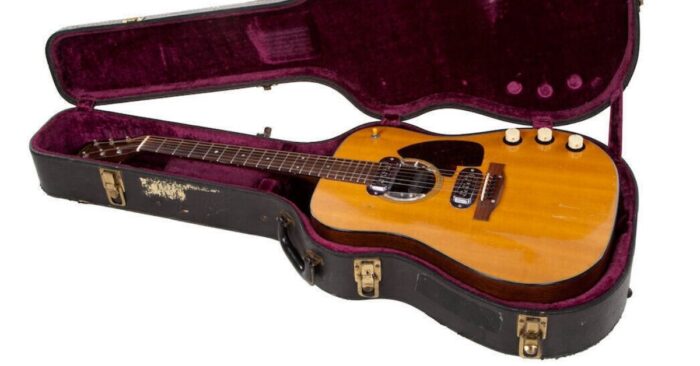 The legendary Martin D-18E acoustic electric guitar from 1959 will go under the hammer as part of the planned “Music Icons” auction on June 19 and 20, as Julien’s Auctions announced in Beverly Hills.

The original hard case is included. On it are several stickers from Alaska Airlines and a flyer from the US hardcore band Poison Idea from the album “Feel The Darkness”. The ground staff may have stuck on the former, the band flyer may have come from Kurt himself. Remnants of luggage tags still hang on the handle. Whether the strings are from 1993 cannot be said, a new package of Martin strings is included, three picks and further Cobain memorabilia.

Reuters, Rolling Stone, Spin and more are writing about today’s announcement of Kurt Cobain’s 1959 Martin D-18E used in Nirvana’s MTV Unplugged in New York, featured in our “Music Icons” auction taking place in Beverly Hills and live online at Julien’s Live on Friday, June 19th and Saturday, June 20th. In what would become Nirvana’s most legendary performance, Kurt Cobain played his 1959 Martin D-18E in a live taping for the popular MTV Unplugged series on November 18, 1993. Approximately five months before his death, Cobain chose this guitar to paint what Rolling Stone called “his last self-portrait.” Perhaps the most important decision Cobain made for his MTV Unplugged performance was the “brush” he chose to paint the self-portrait that would ultimately be recognized as his greatest work. This 1959 Martin D-18E guitar was the only guitar he used throughout the entire MTV Unplugged performance. Cobain purchased this vintage Martin guitar and its vintage hardshell case at Voltage Guitar in Los Angeles. Both the guitar and its case were personally customized it prior to his MTV appearance and the set are being offered together in this auction. Twenty-six years later, Cobain’s MTV Unplugged performance remains the definitive self-portrait of a generation’s most transformative artist. Cobain’s Martin D-18E guitar survives as the most recognizable and important artifact, not only of Cobain’s MTV Unplugged performance, but of Cobain as an artist. JULIEN’S AUCTIONS PUBLIC EXHIBITION & LIVE AUCTION LOCATION Julien’s Auctions 257 N. Canon Drive Beverly Hills, CA 90210 Public Exhibition Monday, June 15th – Friday, June 19th, 2023 Daily: 11:00 am – 6:00 pm Pacific Time Free to the Public LIVE AND ONLINE AUCTION MUSIC ICONS Friday, June 19th, 2023 Session I: 10: 00 am Pacific Time Session II: 1:00 pm Pacific Time MUSIC ICONS Saturday, June 20th, 2023 Session III: 10:00 am Pacific Time Session IV: 1:00 pm Pacific Time #Auction #Music #Memorabilia #JuliensAuctions #RockNRoll # KurtCobain #Nirvana #MTVUnplugged #MTV #Guitar

Who does it currently belong to?

Anyone who suspects that Kurt’s wife at the time, Courtney Love (55) or daughter Frances Bean (27) offer the guitar for sale is wrong. Frances Bean Cobain left the guitar to her ex-husband Isaiah Silva when they divorced.

If he is actually the seller, he should have a not insignificant amount. An olive green cardigan that Cobain wore during the MTV Unplugged session was auctioned off by Julien’s Auctions last October for $ 334,000.

The 1994 Nirvana live album for the MTV appearance with songs like “About A Girl” and “Come As You Are” won the Grammy in the category “Best Alternative Music”.