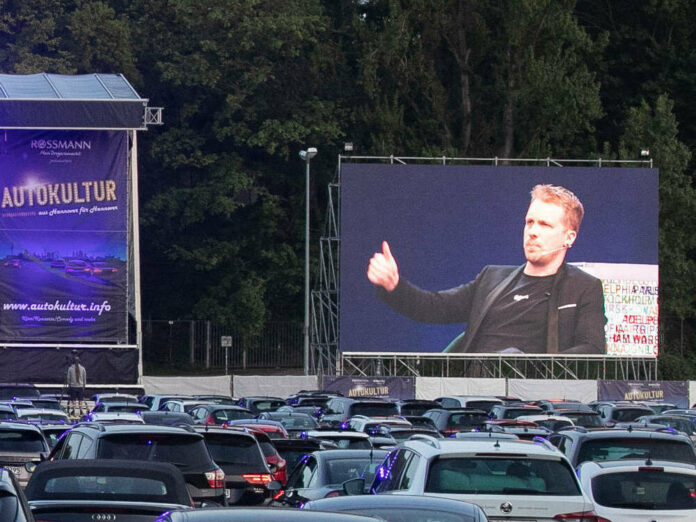 Drive-in cinemas are celebrating a renaissance

The few remaining drive-in cinemas and temporary car shows on large open spaces are celebrating a renaissance that was not considered possible in times of the Corona crisis – albeit slightly misused in parts. Many well-known artists are currently using the stages and screens there to be able to perform their live shows and concerts without risk, despite the ban on events. The latest example: Oliver (42) and Amira Pocher (27) opened the so-called car culture series in Hanover on Thursday.

According to the organizer, 1,000 cars had come to attend the couple on their comedy program “The Pochers Here”. The event on Schützenplatz was completely sold out. However, due to the protection against infection, only a maximum of two spectators were allowed per car. The Pochers’ unusual performance was broadcast live on large screens, and the sound and music were transmitted directly to the cars via FM.

So far, four more shows have been scheduled in Hanover until the middle of June. So both rapper Sido (39) and the rock band Revolverheld will give themselves the honor. However, the program of the car culture series is to be continuously expanded. It will be interesting to see which bands and solo artists will join the current trend.

However, this current Hanoverian idea is not entirely new. So Revolverheld is already on the right with a drive-in tour: On May 20, it starts in Giessen, followed by the performance in Hanover via Erfurt. More dates are likely. Sido has already completed his first drive-in concerts as well as his rap colleagues Alligatoah (30) and SSIO (31), who were admired on stage in Düsseldorf and on the associated screen.

But especially the comedy scene is adapting this idea born out of necessity more and more for itself. In addition to the Pochers in Hanover, Markus Krebs (49) also appears in the drive-in cinemas in Coesfeld, Eschweiler and Bottrop. Bülent Ceylan (44) is also practicing in the new live discipline: He is currently playing a whole series of shows as part of the “Car Watch Festival” in Viernheim in the Rhein-Neckar district. Until May 10th he will be performing six times on the slightly different stage.

In the Wesel drive-in cinema there is also some work for the laughing muscles of motorists: The organizers there release comedians Mirja Boes (48), Hazel Brugger (26), Ingo Appelt (53) and Abdelkarim (38) among others. There is no standing ovation, loud clapping or direct fan contact, but the spectators still provide a good mood for these alternative shows: clapping is done with a light signal or with the help of the horn.

At music concerts there is also another opportunity for the audience to interact, as cuddly singer Max Giesinger (31) was able to experience during his drive-in performance in Baden-Baden . During his hit “80 million” the audience honked to the catchy chorus. To the delight of the protagonist: “Without shit – that’s not what I thought it would be. It’s actually pretty cool, ”said Giesinger about his appearance, according to the“ Badische Nachrichten ”.

However, this trend has not yet become widespread across the board. Approval from the authorities is still pending in some federal states. For example, in Munich a similar event to the famous Theresienwiese in Hanover has been planned for a few weeks. It remains to be seen whether these drive-in concerts will prevail across Germany in the coming weeks and months.