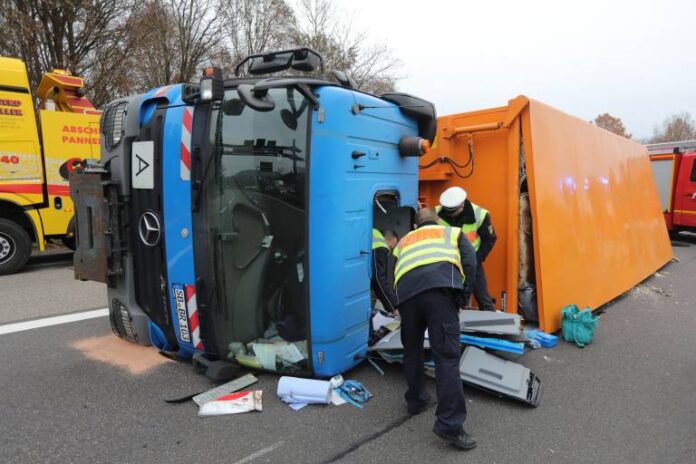 Asleep at the wheel: truck driver falls asleep, his 40-ton truck rolls 300 meters of guardrail, then the trailer tips over – corrosive acid runs out – hours of full closure in both directions!

Dangerous second sleep: The driver of a truck apparently nodded briefly on the A33 between Borgloh and Hilter. About 700 meters before the Hilter exit in the direction of Bielefeld, his articulated train then came off the road to the right and touched the guardrail, which was then torn down at around 300 meters.

Startled by the carom, the driver jerked against it, causing his trailer to rock, tip over and remain in the fast lane.

Fortunately, the driver was not injured. However, the truck had loaded general cargo, including an IBC container with an acidic acid that was apparently damaged. The fire department therefore moved in with a large contingent. Specialists in a dangerous goods unit from Osnabrück finally recovered the container in question. The A33 was fully blocked in both directions for hours during operation. There were significant traffic disruptions in the region.