Home World "Police call 110: You should be holy!": This is the Brandenburg thriller 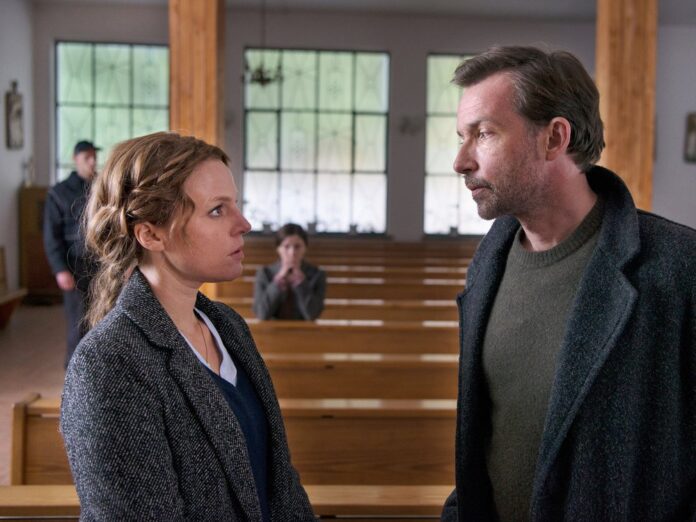 Faith, illness and a spark of hope: In the new “Police call 110: You should be holy!” (May 3, 8:15 p.m., the first), Chief Criminal Investigator Olga Lenski (Maria Simon, 44) and her partner Adam Raczek get it (Lucas Gregorowicz, 43) to do with people who seem to do everything out of religious belief. A hideous act drives the two investigators in the German-Polish border area, while one emotional event chases the next.

16-year-old Larissa Böhler (Paraschiva Dragus, 19) gets pregnant unintentionally. While the parents Nikola (Julia Krynke, 40) and Simon Böhler (Shenja Lacher, 42) find it difficult to cope with the situation, the adolescent is silent about the child’s father. When the doctors find a trisomy 18 in the unborn child and assume that the child with severe disabilities is born, an abortion should be carried out. Larissa is admitted to a hospital in Frankfurt (Oder). But it turns out differently.

A young man, who calls himself Elias, sneaks into the operating room and cuts the child out of the young mother’s stomach. When Commissioners Lenski and Raczek arrive at the scene of the crime, the young woman is in mortal danger. The amazing thing: contrary to all predictions, the child is in good health. The police immediately start searching for the perpetrator. Who was the young man and why did he commit the bloody deed?

Absolutely. Because this “police call” is hard to beat in terms of emotion. At the center of the action are faith and the Roman Catholic Church. At the German-Polish border, the crime thriller fan receives a special religious hour, between exorcism and biblical quotations. The viewer is thrown from one extreme situation to the next. A family on the verge of despair, a healthy child who was supposed to be aborted and a young girl who has the baby cut from her belly – the strained could reach their limits.

But the two commissioners also fight tears more than once. In the sense of the “Howcatchem” concept, the viewer knows who the culprit is at the start of the crime. In this “police call 110” one searches for a really “bad guy” in vain. The story is more about people who try to do good – but ultimately fail. Actor Tom Gronau (23) magnificently embodies the driven young man, who had to suffer some torments in his life.

The team around the lighting and music design should also be mentioned with praise. The cool tones and gloomy melodies underline the topic perfectly and turn the thriller into an all-round successful television experience. The only little downer: Not all questions and mysteries that arise in the course of “Holy should you be!” Are clarified. The successful and nerve-wracking showdown at the end almost makes up for that.