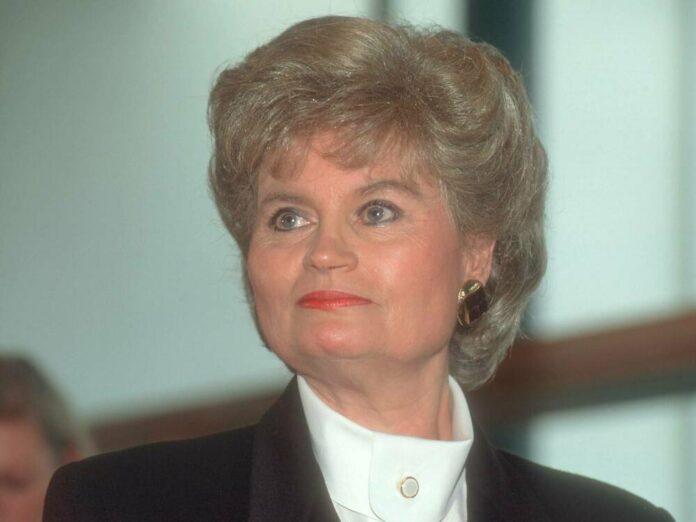 She must have suffered a lot. Her illness, her life circumstances, and ultimately, if you will, the career of her husband, the “eternal chancellor” Helmut Kohl (1930-2017). In the end, her strength was completely exhausted – and Hannelore Kohl (1933-2001) committed suicide. On May 1st, the ARD shows the big documentary “Hannelore Kohl – The first woman” (Das Erste, 6:30 pm), which sheds some light on the motives for this suicide.

The film portrays the life of a person whose fate was obvious to endure more than it could endure. “The story of Hannelore Kohl is also the story of an increasingly lonely woman. One who was often misunderstood and disparaged much more often, who always had to show strength and yet did a lot of good, ”is how the ARD announces the program.

And: “A woman whose pace of life was determined by legislative periods and the Helmut Kohl power system and who ultimately also perished this power policy due to the freezing cold.”

Her death on July 5, 2001 sparked a flood of speculation, most of which came from the realm of the imagination. The “Spiegel” wrote : “For many Hannelore Kohl was only the tragic victim of her power-obsessed, selfish man. On the other hand, those who knew her better described her as a clever, committed woman who had deliberately led a life in the shadow of Helmut Kohl. ”

Who was Hannelore Kohl? Almost ten years ago, Ufa boss Nico Hofmann (60) was concerned with this question. The film and TV producer was particularly close to the topic. His father Klaus Hofmann was a Bonn correspondent for many years from Helmut Kohl’s Ludwigshafen newspaper “Die Rheinpfalz”. Even more: he was a confidant of the powerful CDU politician, wrote his speeches and was the author of a Kohl biography, both families knew each other well.

Nico Hofmann wanted to turn the history of the chancellor’s wife into a large, two-part documentary drama, with game scenes, archive recordings and interviews with contemporary witnesses. Working title: “Hannelore Kohl – A woman in the shadow”. The two sons Walter and Peter Kohl were involved. Peter Kohl’s biography of the mother “Hannelore Kohl – Your Life” served as the model for the screenplay written by the renowned documentary filmmaker Raymond Ley.

The project failed due to massive objections from the Kohls. The NDR announced in 2015 that plans for a biopic about Hannelore Kohl would be abandoned, “since with her son Peter Kohl no uniform view of the main character’s layout could be found”. And brother Walter complained in an interview with “Bunte”: “Our mother is consistently portrayed as a middle-class fool without her own opinion.”

Nico Hofmann refrained from the project, but handed over the already filmed material to the former “Spiegel” editor-in-chief Stefan Aust and the TV journalist Daniel Bäumler. They supplemented the work with further interviews and historical film recordings and turned the two-part drama into an 86-minute documentary, which is now being shown this Friday and “describes the lost world of Hannelore Kohl as precisely as discreetly”. (“Mirror”)

The work on the film must have been difficult because Hannelore Kohl was a very quiet person. She never spoke publicly about the great traumatic experience in her young life. In the last days of the war in 1945, she was raped by Soviet soldiers as a twelve-year-old while fleeing Saxony. She herself only said that “violence was done to her at the time”, the soldiers had thrown her “out of a window” like a cement sack. In doing so, she suffered a spinal injury that tortured her all her life.

After the death of her father, she had to give up her studies in linguistics at the Institute for International Studies and Interpreting at the University of Mainz for financial reasons. Then she worked for a publishing house in Stuttgart, then as a commercial employee at BASF in Ludwigshafen. After her marriage and the birth of her two sons, she took care of the Kohl family’s household. She saw that she had largely unconditionally put herself in the service of her prominent husband: “My way is the way of accompanying people.”

It was a tough road. Hannelore Kohl became the target of contempt for the left-liberal milieu in the 1970s and 1980s. While her husband was taunted as a “pear” and political provincial idiot, his wife was mocked – without even knowing her – as “Barbie from the Palatinate” and “blond fool”. And for their children, as Peter and Walter Kohl tell in the film, attending school was a gauntlet, they were even refused admission to the sports club.

The RAF terrorist attacks made Hannelore Kohl’s life unbearable. Her husband was particularly at risk; the Kohl house in Oggersheim was expanded like a bunker. Wife and children had to live in this dungeon, while Kohl only came home on the weekends (with his additional police escort).

Hannelore Kohl has also suffered from a penicillin allergy for decades. When she accidentally received a penicillin-like antibiotic after an infection in 1993, it was apparently the trigger for a light allergy. She could only leave the house, which was strictly darkened during the day, after sunset – and could no longer tolerate heat.

“I burn from the inside,” she is said to have told a friend. The house was strictly cooled down by air conditioning, so that Helmut Kohl came into a cold room when he was with the family on weekends. The sons report that the father was completely overwhelmed with this situation.

In this situation, which is also overshadowed by the CDU donation affair and in which Hannelore Kohl was called “donation whore” according to her son Walter, the decision to commit suicide has long since matured.

She wrote over a dozen farewell letters to family and friends and was found dead in the bedroom by her housekeeper the next morning. Her note was hanging on the door: “I sleep and want to go for a walk later.”

She signed the farewell letter to her husband with “Your little snake”. A painted serpentine line as the last word by Hannelore Kohl.