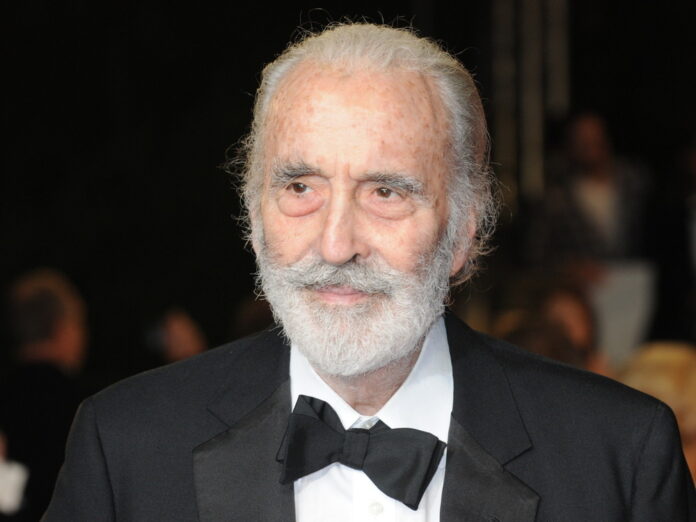 What would Hollywood have done if Sir Christopher Lee had not been born in London on May 27, 1922, the son of British officer Geoffrey Trollope Lee and his wife Estelle Marie? Who as Francisco Scaramanga would have aimed at James Bond with his golden gun? Who would have fallen into the dark side of the Force as Count Dooku in “Star Wars” – and who would have made the heroic journey to Mordor hell as well as the hobbit Frodo along with companions? Nobody was as good at being evil as Lee. Exactly five years ago, on June 7, 2015, the cinema’s favorite villain died.

Looking at it retrospectively, Christopher Lee may be a born villain. This thesis is supported, for example, by the fact that his first role in a school performance was that of a world-famous villain: Rumpelstiltskin. In real life, however, Lee could very well imagine himself as a hero. In 1941 he volunteered for the Royal Air Force, and World War II led Lee as a communications officer to North Africa, Italy and Austria. After the war ended, he spent the last months of his military service tracking down Nazi war criminals. The abysmal evil had to be careful of Lee for a change.

Lee struggled with minor supporting roles for ten years before he made his breakthrough with his first horror role for the famous Hammer Studios in 1957: the actor was made for the role of the monster in “Frankenstein’s Curse”. Dr. Frankenstein gave birth to Peter Cushing, perhaps the most legendary horror team in film history. In 1958 the two were first seen in their prime roles in “Dracula”: Lee as charismatic Count Dracula, Cushing as a grim vampire hunter Abraham van Helsing.

Over the next few years, Lee embodied the bloodsucker from Transylvania and other characters from the classic horror repertoire countless times, including Jekyll and Hyde, the undead mummy, the mad monk Rasputin and the Chinese super villain Fu Manchu. It seems almost a miracle that Lee still had time to get married: In 1961, he led the Danish ex-model Birgit Kroencke (85) to the altar, the marriage lasted until his death. In 1963, Lee’s only daughter, Christina, was born.

Lee had no problem with the role of a monster – but he did have to be pushed into the corner of the ever-trashier monster. Lee was striving for more demanding tasks. Lord Summerisle in “The Wicker Man” (1973) and of course Scaramanga in “James Bond 007: The Man with the Golden Gun” (1974) were just what he wanted. His distinctive deep voice also made Lee a sought-after voice actor – thanks to his language skills not only in English. In the German version of “The Last Unicorn” (1982), for example, he lent his voice to the dark King Haggard. From “Sleepy Hollow” (1999) Lee was also an actor and speaker for Tim Burton’s regular cast.

An unbelievable 67 years separate Lee’s first documented film role in “Under the Spell of the Past” (1947) and his last in “The Hobbit: The Battle of the Five Armies” of 2014. Less than a year before his death at 93, he slipped into it again his role as a diabolical magician Saruman, as he had already done in the “Lord of the Rings” trilogy. Fun fact: Lee was the only member of the cast who personally met “Lord of the Rings” author JRR Tolkien.

In general, his later years still held various highlights. His knighthood by Queen Elizabeth II on June 13, 2009, for which Lee had to wait 87 years. The mime also crowned himself the oldest heavy metal singer in human history to date when he released the album “Charlemagne: The Omens of Death” at the age of 90.