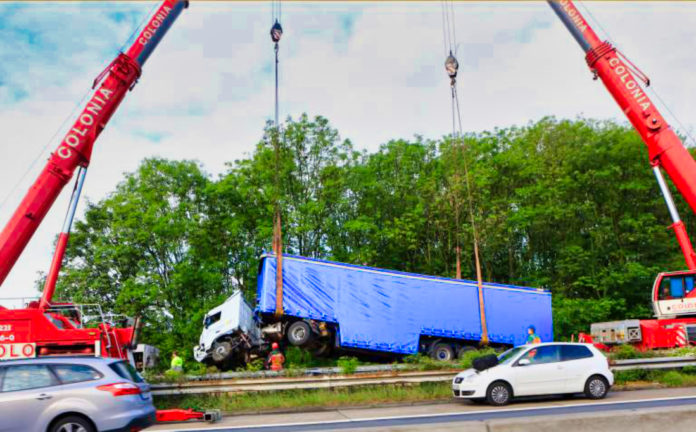 Dramatic scenes in a spectacular accident! 140 tons of heavy transport crashes into the central guardrail after a technical defect. A 64-meter long crane element hangs over all three lanes and blocks the roadway, as the following car shoots into the scene of the accident!

It looks like a scene from the horror film “Final Destination”. A huge heavy transporter is on the highway when sparks are suddenly visible, the rear of the 140-ton colossus breaks out to the left and crashes into the central guardrail while the towing vehicle is just about to stay on track. Hardly visible in the dark: the 65-meter-long load, an element of a loading crane for Deutsche Bahn, protrudes over the entire carriageway as well as in the opposite direction at a height of one meter. The cones of light of two cars on the opposite lane show how they can just about avoid. Then, a few seconds later, a car shoots past the camera, applies the brakes and comes to a stop a few centimeters before the blockade. If the driver had reacted only a fraction of a second later, he would almost certainly be dead.

What sounds like a cinema film happened in the night on the A2 at Ziesar. Raphael Bol and his team were on the way to Magdeburg with the heavy transport. Due to a technical defect, the rear loading trailer is suddenly out of control and steers into the central guardrail, which it sometimes even breaks through. Bol switches the warning signs of his support vehicle to no overtaking and stops in the middle lane. “If I had got out there, I would definitely be dead. This is insane,” Bol comments the following. Because a driver ignores the signs and drives just past the support vehicle. The driver only recognizes the danger at the last moment and manages to stop before the blockade. “What else do we have to do as support vehicles so that car drivers react,” asks the shocked Bol. “If we show something in the back, please take it seriously.”

The fact that nothing else happened overall could also be due to the corona crisis. “At normal times without Corona, more would have happened here because the freeway would be fuller,” says Dennis Rey, mining operations manager. He and his team now have the task of putting the 140 tons of freight back on the road. “This is not an everyday occurrence, but a different order of magnitude. A normal truck has 40 tons, the part has 140 tons. That says it all, ”says Rey. Since special equipment has to be used, the motorway remains fully closed until late into Wednesday in the direction of Magdeburg. The police have started an investigation into what broke and triggered the accident.